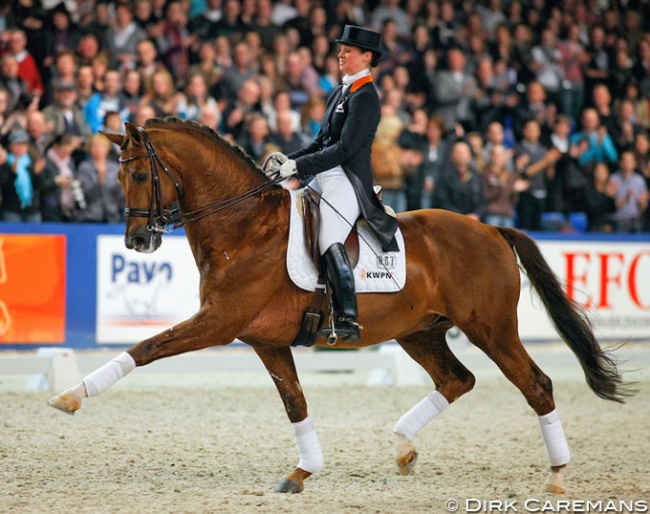 KWPN foundation stallion Jazz, the most significant sire for dressage breeding in the KWPN studbook, has passed away. He was 29 years old.

"With pain in our hart, but mainly with gratitude for all he has meant to us and to dressage sport, we had to say goodbye to the king out stable last week," owner Broere communicated on 6 January 2020.

Jazz was by Cocktail out of Charmante (by Ulster)

Huub sold the colts from his brood farm that was mare dominated. Jacob was purchased as a 6-month old colt by Bob Rijsdijk and Nico Witte, who reared him.

Jacob was approved at the 1992 KWPN Stallion Licensing and that is when he was renamed Jazz.

He did his performance test soon afterwards and was described as "honest, reliable, temperamental, and likes to look at everything." He scored 71 points.

Tineke Bartels was allocated the ride and she trained the liver chestnut from novice to Grand Prix level.

"I always had a special feeling about Jazz," Tineke reminisced. "Jazz is very intelligent, has a friendly approach to people and was always very curious about everything."

In December 2001 Jazz became owned by a syndicate of 10 people, when requests from abroad came to purchase the Grand Prix stallion. He received the prefix Broere in front of his name as Cees and Anne Broere were the main investors in the syndicate (20%).

Jazz made his international show debut in 2000. He finished fourth at the Dutch Grand Prix Championships.

Bartels and Jazz represented The Netherlands at the 2002 World Equestrian Games in Jerez de la Frontera, Spain, substituting for

In 2004 Broere bought full ownership of the stallion and the sire moved to their yard in Ablasserdam, The Netherlands, where Kirsten Beckers got the ride. He became instrumental for her career as he was her first in many ways: first Dutch Grand Prix Championships, first time Aachen and first time submitted to the Dutch senior squad.

In 2005 Beckers finished fifth at the Dutch Dressage Championships in Nijmeghen. The pair competed at international Grand Prix level from 2005 till 20017. The year 2007 was their best with starts in Zwolle, Den Bosch, Gelderland, Rotterdam, Aachen and Maastricht. The latter show was their final CDI in their career. They were also fifth again at the National Championships.

They were close to getting a spot on the Dutch team for the 2008 Olympic Games in Hong Kong, but the stallion injured himself in 2008. It was the only time the horse sustained an injury in his time at Broere, according to Beckers.

Jazz has done for KWPN breeding in The Netherlands what Donnerhall did in Germany. He was the flagship of modern dressage breeding and clearly stamped his offspring in looks, gaits and often in character.

In his first breeding year he covered 100 mares, which was much at the time for an unproven colt.

In 2002 he was pronounced Keur stallion based on his offspring in sport? In 2006 he got the predicate Preferent and in February 2007 he was named KWPN Stallion of the Year 2006.

In 2011 the motility of Jazz' semen was heavily reduced but he continued to stand at stud and be asked by breeders.

The KWPN has recorded over 3100 offspring by Jazz in its registry. He has 13 licensed sons and 99 preferent daughters.

Watch Out for Jazz

Jazz offspring often look alike and his most notorious trait -- passing on spookiness or hypersensitivity -- made him also notorious. In Germany the saying went around "willst du Stress Kauf ein Jazz" (do you want stress, buy a Jazz).

The general consensus is that Jazz offspring are more for professional riders than amateurs although there are numerous Jazz out there with a normal temperament.

Nonetheless, this "jazziness" ended up being subordinate to the fact that Jazz was a clear Grand Prix horse producer and most sought after by competitive dressage riders for their athleticism and good hindlegs.

Jazz was known to be a Grand Prix horse producer and just like Donnerhall, his string of Grand Prix sons and daughters is never ending.

The KWPN has counted 125 Dutch warmblood registered offspring by Jazz competing at national and international Grand Prix level and 195 at small tour level.

Broere Stud owns two clones by Jazz. They were cloned by the U.S. company Cryozootech and born in 2012.