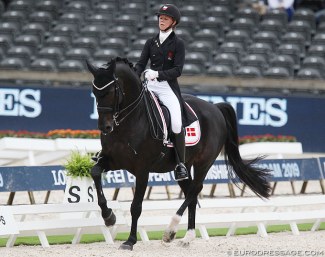 Agnete Kirk Thinggaard has announced that her top ride Jojo AZ will be retired from competition sport this weekend. The 2019 CDI-W Herning will be his last show.

"This week I am riding the World Cup in Herning with Jojo. This will be his last show," said Thinggaard. "He is an amazing horse and I love him to pieces! He has given me everything and now I want to give something back to him. Can’t wait to go into the arena in Boxen (arena) and dance with him, one last time."

Under Finnish rider Henri Ruoste, Jojo AZ had his first international season in 2013. The combination competed at the CDI's in Compiegne, Kapellen, and Deauville and their results earned them a place on the Finnish team for the 2013 European Dressage Championships in Herning, Denmark. There they were the highest scoring Finnish pair qualifying for the Grand Prix Special.

In June 2018 Thinggaard announced that her now 16-year old Hungarian sport horse Jojo AZ (by Ginus x Justboy) would become the schoolmaster for her husband Claus Thinggaard, but she added at the time that it was not "a permanent retirement from international competition".

However, the pair returned to the arena in 2019 and they competed at the CDI's in Herning, Uggerhalne, and Aachen. They represented Denmark once more at the 2019 European Championships in Rotterdam, where they finished 21st in the Grand Prix Special.