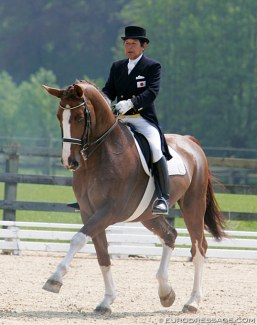 Toshihiko Kiso, one of Japan's most well known dressage riders, has passed away three months ago. Kiso lost a brave fight against cancer.

Kiso, who was born on 29 November 1939,  competed at international Grand Prix level for almost twenty years.

In the early nillies, Kiso trained with Anky van Grunsven after purchashing her Dutch warmblood gelding Gere (by Beaujolais). He showed the bay gelding in 2000. He qualified for the 2001 World Cup Finals as Asian League winner, but couldn't compete in Den Bosch as there was a ban on animal movement in The Netherlands at the time.

Kiso's most successful dressage horse was the Westfalian gelding Esko (by Ehrentusch x Affekt). He showed the horse at the 2003 Open European Dressage Championships in Hickstead (59th) and at the 2006 World Equestrian Games, where he finished 80th.

At that time he also showed the Swedish warmblood stallion Corrado (by Cortez), followed by the KWPN bred Kir Royal (by Apollonios xx)  and World Fire (by Weltmeyer), which he showed at CDI's in Europe between 2011 and 2013. There was also Der Poet (by Donnerhall x Caprimond) which he showed once in 2013

His last international Grand Prix horse was the Hanoverian gelding De La Vega (by Davignon x Wolkenstein II), which he showed at two CDi's in Japan in 2015. He had entered for the CDI Tokyo in October 2016 but withdrew.

Kiso also ran a riding club in Japan, which has now been closed. Kiso was 79 years old.