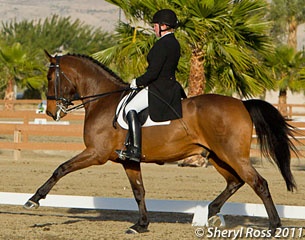 American Grand Prix rider Sheryl L Ross has passed away on 2 January 2018 after a long battle against cancer. The 60-year old bravely fought cancer for a third time. Sheryl was an avid dressage rider, animal lover and horse photographer. She contributed to Eurodressage. Aboard her Danish warmblood Lancaster (by Lobster x Aleksander) she rode her first Grand Prix test in October 2016 after taking him through the FEI levels. Her friend Chris Shipley wrote a beautiful message about Sheryl's sad passing on Facebook.

The 15-year old Danish warmblood gelding NOH's Wizard (by White Talisman x Ragazzo) has been sold to American amateur dressage rider Gavin Britz. As a youngster NOH's Wizard was competed by Danish Astrid Gemal who took him to the 2008 World Young Horse Championships in Verden, where he placed fourth. He then sold to Mexicans Lourdes Arzio and Paloma Munoz, and was competed by Antonio Rivera Galarza and later on by Jesus Enrique Palacios. The latter rider represented Mexico on Wizard at the 2015 Pan American Games, where they were 10th overall after the Inter I Kur finals. By January 2017 Wizard had moved to Steffen Peters' yard in California, who competed him once at a CDI in Las Vegas, winning the Grand Prix and Special. Gavin Britz, a Professor of Neurological Surgery, has bought Wizard as a Grand Prix schoolmaster.

Dutch dressage rider Jessica Nijpjes and her partner Michael became the proud parents of their first baby, Gwen Elisabeth, on 27 December 2017. The baby girl weighed 3400 grams at birth and is 51 cm tall.

De Hoefslag reported that former Dutch pony team rider Demy Kurstjens had to say goodbye to her fourth level (ZZ-Zwaar) horse Zandro (by Jetset D). The gelding suffered from a second severe attack of laminitis and it was decided to euthanize him. The bay already suffered from a serious bout of laminitis two years ago and it took much veterinary care and a super strict diet to bring him back. The horse was now back in full training and relapsed nonetheless. Kurstjens had hoped to compete him at Young Riders level in February.

Dutch FEI rider Chantal van Lanen has leased her 20-year old Grand Prix horse Revival (by Kelvin) to Elles van Asseldonk. Van Lanen considered the bay gelding too fit to be retired to the field and has leased him as a schoolmaster to aspiring Young Rider Elles. Chantal's last international competition was the 2016 CDI Deauville, where she rode Revival in the medium tour Inter B and the Inter II.

Ulla Salzgeber is on the move. She has moved her business from Ettringen to Dr. Max Stechele's equestrian centre Equopark in Wehringen, Germany. Salzgeber was originally from Bad Worishofen during her glory days on Rusty, but in 2010 she moved to the Gnadel family's equestrian centre Obere Mühle in Blonhofen, Germany. In 2016 she left Obere Mühle for the Wenzel family's stable in Ettringen, just 12 kilometers down the road. In September 2017 Salzgeber announced her retirement from an active international competition career to focus more on training clients. Ulla, who is active on her Facebook account, reported a big scare at the barn, when on the night to 28 November 2017 a fire broke out in the main indoor arena. The Olympic medal winner has now moved to Wehringen. She has been coaching students all over Europe and was recently in Andalusia, training the new owners of her horse Fred the Red amongst others.

The buckskin German Riding pony stallion Caramel FH has been gelded. The strapping pony was the 2010 Hanoverian Pony Stallion Licensing Champion. He has produced five licensed sons and several offspring, such as Coer Noble and Cream della Cream VEC who did well at the Bundeschampionate. The Baumgurtel family, who owns Caramel, have gelded the pony and focus him on sport. "A life as a stallion means a life of limitations," said Bea Baumgurtel. "We have decided to give him a stress-free life as a gelding. Caramel prefers to be in the group, not outside it and as a gelding he can enjoy a contact with other ponies."

German horse dealer, breeder and stallion rearer Johannes Rüter passed away. The 62-year old died had been hospitalized in December and died on 27 December 2017. Rüter was involved in getting stallions licensed such as Villeneuve, Flavis, Lauristan, Red Diamond, Ehrgeiz, and Landlob and he himself bred the licensed stallions Peking, Dolby Surround, and Beverly Hills amongst others. His funeral was held on Friday 5 January 2018 in his home town Waltrop in Germany.