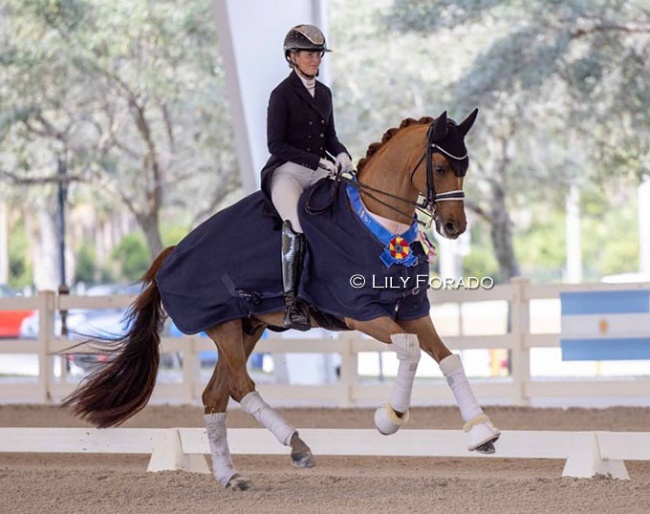 Only shortly after her arrival in chilly but sunny Florida, French Olympian Morgan Barbançon has claimed her first victory of the season at the 2023 CDI West Palm Beach.

The Gold Coast Opener is one of the old, original CDI competitions in Florida and has had several bases over the years. For 2023 the event moved from their spot at the Global Dressage Festival in the past few years, to West Palm Beach at the Jim Brandon equestrian centre. For Europeans, this venue is known as the place where the World Dressage Masters were held back in the 2010s.

Bred by Christian Becks, Deodoro was presented at the 2013 Westfalian Stallion Licensing in Munster. The chestnut sold to Swedes Per Runesson and Johan Ifversson and had him licensed and performance tested in Sweden in 2016. He stood up for stud at Gransbo stuteri and sired 45 offspring in Sweden. He was competed in Sweden by Minna Telde until 2017.

Barbancon bought the stallion from Ifversson after he had been gelded to be focused on sport. The first year was an "adventure" as he manifested serious stallion behaviour and was very difficult to handle and ride. He once threw Morgan off and she fractured several bones. He only settled down after a year. Morgan made her CDI show debut on him at small tour level at the 2019 CDI Ornago, rode him in the medium tour in 2020 and moved him up to Grand Prix by June 2021.

Bred at Schockemöhle's Gestut Lewitz, Don Design is one of the few offspring by Der Designer (by De Niro x Weltmeyer). This sire was acquired by Russians Elena Knyaginicheva and Georgyi Rtischev for 1.1 million euro at the 2011 PSI Auction. Under Russian Inna Tzydrenkova he competed at the 2012 World Young Horse Championships in Verden, but had to retire in the preliminary test. The Russians then sent the stallion in training with Michael Eilberg, who competed him internationally from 2015 until October 2016, when the horse returned to Hof Kasselmann. Insa Hansen competed him a few times in Germany between 2017 and 2019.

Der Designer's son Don Design sold to the Dutta's in the late 2010s and Susan made her international show debut on him at the 2019 CDI Leudelange in Luxembourg. Trained by Adrienne Lyle and working with frederic Wandres since the summer of 2022, Dutta is in her fourth season competing the black at Grand Prix level.

A former European junior rider champion, Abbelen is now working as a team rider at Hof Kasselmann and was given the opportunity to travel to Florida for the winter with trainer Frederic Wandres and Lars Ligus. Sam Donnerhall was a sales horse Abbelen has had in training since the spring of 2021, but in November 2022 the ownership switched from the Swedish Tovek family to Abbelen herself.

Sharing barns at Hof Kasselmann U.S.A. with Abbelen is Australian Jemma Heran who made her international debut on Saphira Royal. Heran and the 14-year old Rhinelander mare (by San Amour x Monteverdi) scored 65.174% for 9th place. Heran is training with Frederic Wandres.

Photos © Lily Forado - photo gallery of this show on lilyforado.com