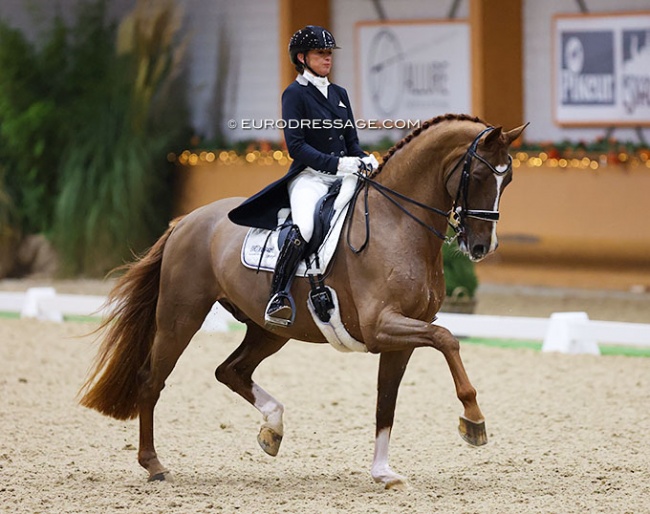 Winter has come in Europe and the indoor show circuit took a flying start with the international dressage competition at equestrian centre De Peelbergen in Kronenberg, The Netherlands, on 2 - 4 November 2022. Kronenberg became the venue for Grand Prix debutants - Pidgley on Gio and van Baalen with Habibi - as well as the farewell show for come back kid Delaunay.

Peelbergen, a Venue to Watch for the Future

Icy temperatures outside did not affect the buzzing atmosphere indoors in the brand new equestrian centre de Peelbergen, which hosted its third international dressage competition since 2019.

The venue is best known for its big show jumping and driving competitions, but dressage has now found its place on the calendar there. With a centrally located and cosily heated bar and restaurant in between the two competition arenas and an adjacent warm up ring, spectators have a 180 ° view on the action in the arena. Only the tent stall stabling keeps these show grounds from being as state of the art as similar competition yards such as Sentower Park (Opglabbeek) and Azelhof (Lier) in Belgium. Some riders found the footing a tad deep, probably from all the ploughing of the show jumpers.

The dates for this CDI were the old "Roosendaal Indoor" competition dates and while many summer and autumn internationals this year struggled to fill their entries and there certainly was a burn-out effect happening after an unusually busy show year, Kronenberg nevertheless had a packed starters lists reminiscent of the Roosendaal Christmas show.

Dutch team rider Marlies van Baalen rode her home bred Habibi DVB (by Don Schufro x Johnson) in his first international Grand Prix competition and they had a winning start. They scored 73.956% for the victory in the Grand Prix in a field of forty competitors.

The chestnut gelding was trained and competed by Mara de Vries from novice to small tour level. The horse was named after Marlies van Baalen's eponymous young rider horse from the late1990s. De Vries showed Habibi at the 2017, 2018 and 2019 World Young Horse Championships and in 2020 made a winning international small tour debut at CDI Hagen. Mara's resignation as an assistant rider at Van Baalen stables in the summer of 2022 prompted Marlies' takeover of the horse. Only two weeks before their international debut, she premiered Habibi at national big tour level in Holland.

While Marlies' Olympic mount Go Legend (by Totilas x Ferro) has been on a break from international showing since March 2022, Habibi has become her second iron in the fire in the race towards Paris. In Kronenberg the pair showed much potential in the Grand Prix although the passage could have been more closed and the pirouettes more balanced. There was plenty of promise and quality. In the Grand Prix Special they landed second place with 74.489%%. Their debut scores bring much to the table for Dutch team selection.

CDI Debut for Pidgley on Gio

British junior rider Annabelle Pidgley made her international show debut on Charlotte Dujardin's Tokyo Olympic medal winner Gio (by Apache x Tango) in Kronenberg. No dilly-dallying at young riders' level or even Under 25, it was straight into the senior class for this 18-year old, who boasts Cathrine Dufour and Charlotte Dujardin as her trainers.

In October 2021 Gio sold to the Pidgley family and Annabella has been getting to know "pumpkin" under the careful supervision of her two trainers. They have competed at several national shows in the Inter II and Grand Prix classes, but Kronenberg was their trial by fire on foreign turf. In the Grand Prix the pair gave a very rushed impression in which the horse was often ridden over tempo in the trot extensions and tempi changes, which led to several changes not being entirely through behind, but overall young Pidgley achieved a very good test and coped with a lot of pressure as everyone came to watch her test. Gio shows himself as an honest and reliable schoolmaster for the ambitious Brit who seems to have set her sights on Paris.

The pair scored 73.630% in the Grand prix although the judges were all over the place with their scores, unsure and flustered with how to handle this famous youth rider, on an even more famous horse, and with British's queen of dressage, Charlotte Dujardin, watching on the sideline. The scores ranged from 71.413% to 75.870%. In the Grand Prix Special on Saturday, the duo upped the ante and won the class with 75.085% although the individual scores were jojo-ing on the board: from 72.979% to 77.766%.

The gelding made his CDI come back in October after a 1.5 year break from international sport. In Kronenberg, the gelding appeared less bulky in muscle than how he used to look, but he was still good on his legs and obediently executed all the Grand prix movements. The bridle contact was not at its best with the mouth open, but the horse produced consistent rounds and finished second in the Grand Prix (73.761%) and won the freestyle on Saturday evening (76.410%).

Eurodressage photographed (almost) all riders competing at the 2022 CDI Kronenberg. If you are want to use our photos for social media or prints, email us first.