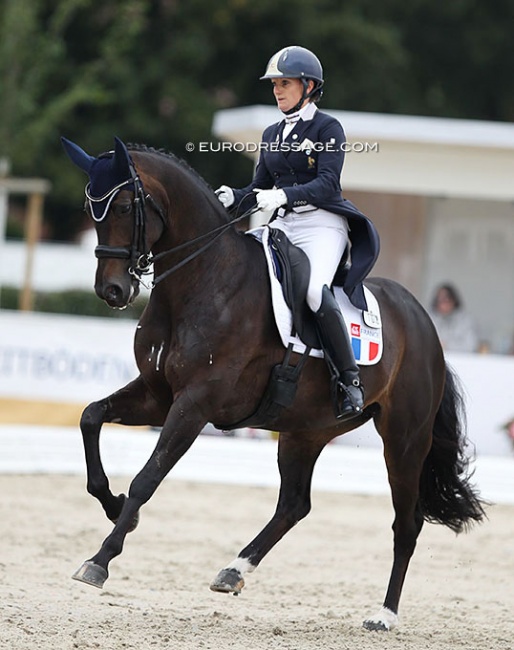 Jarina des Vallées, a French team horse at the 2021 World Young Horse Championships, will continue its career as a junior rider's horse. The mare has been sold to the Pelardy family.

Dressprod announced the news that the 8-year old mare has been sold.

Jarina des Vallées is a 2014 born KWPN mare by Everdale out of Arina (by Sandro Hit). She is bred by Gemma and Harry Holleman in The Netherlands

She was first offered for sale in the Van Olst Sales in the spring of 2017 but eventually sold in the 2017 Excellent Dressage Sales for 29,000 euro.

Jarina had sold to France and continued her sport career under owner Barbara Clement Klinger.

She competed twice nationally as a 5-year old

The mare made its international show debut in 2021 at CDI Le Mans, where they finished fourth. They were selected for the French team for the 2021 World Championships for young dressage horses in Verden, where they placed 10th in the finals for 7-year olds with 78.772%.

The now 8-year old Jarina has sold to the Pelardy family for their 16-year old daughter Anne Dupuy Pelardy.

The 16-year old Anne was member of the bronze medal winning team at the 2020 European Children Championship on Hilario Saint H (by Herzensdieb x Acorado). In 2021 she competed at the European Pony Championships on Champomy (by FS Champion de Luxe x Dein Freund) and this year has moved to junior level with Hilario. The pair won bronze at the 2022 French Junior Championships.