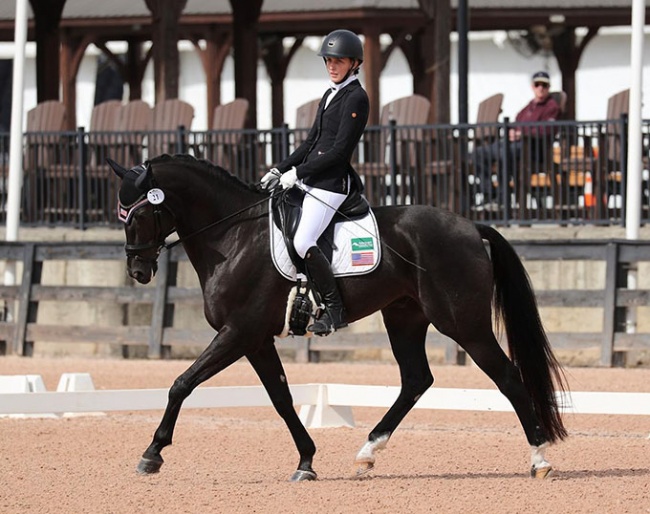 The Para Dressage competition at CPEDI 3* Tryon on 28 - 30 October 2022 saw a small contingent of five up-and-coming combinations who took advantage of the opportunity to gain experience at the international 3* level.

The athlete-and-horse pairs completed their  Team and Individual Tests, then completed the weekend with the Freestyle.

At the end of the three tests, Fiona Howard (Boston, Mass.) had the top combined score to win the CPEDI3* individually riding Jagger, her own 2012 Westphalian gelding. Howard and Jagger’s partnership is brand new, but their compatibility was evident from the start.

“I had entered a local show in the middle of September on a different horse,” said Howard. “In the days before the show, my coach and good friend Kate Shoemaker mentioned she knew of a horse that she believed would be a great match. I had my first ride on him the day before leaving for that show. We had such a great ride, which led to Jagger’s previous owner and Kate bringing up the idea of changing my entry for the show the next day. We had a great show, solidifying that it was truly a perfect match, and we brought him home the following week. He has such a good mind and always tries his hardest. He’s so honest and has adapted so quickly to working with my disability.”

The CPEDI3* at Tryon gave Howard and Jagger an opportunity to showcase some of the elements they’d been working on at home on a big stage.

“The past few weeks, we have been working on tapping into his bigger trot despite the limitations of my body,” said Howard. “It was really great being able to feel some of that work in the show arena this past weekend. We’ve also been working really hard on our halts, and they were definitely the highlights of my tests, scoring up to a 9.”

Howard says her goals with Jagger in the near future include continuing to compete at the CPEDI3* level with an eye toward the USEF Para Dressage National Championships at the U.S. Dressage Festival of Champions next summer, and potentially even bigger things beyond.

“My big ambition is to aim for a spot on the Paris 2024 [Paralympics] team,” she said. “This is my first time verbalizing that ambition, but after this weekend it is finally starting to feel like it may be within reach. I’ve been competing in dressage since I was 8, and it’s always been a dream of mine.”

The CPEDI3* at Tryon included a team component, and while the U.S. team competed unopposed, the athletes still had the opportunity to gain experience in a true international-style competition, building for the future. In addition to Howard, the team included Genevieve Rohner (Park City, Utah) and Kate, Craig and Deena Shoemaker's Solitaer 40; Andie Sue Roth (Sanger, Calif.) and Lisa Hellmer's Aniko; and Cynthia Screnci (Boca Raton, Fla.) and her own and Volado Farms' Sir Chipoli.

“This was my first time riding on a U.S. team,” said Howard. “It was a slightly different experience as it made me want to produce my best scores not only for myself, but for the team. It was an honor to compete on the team and I really felt supported by my fellow teammates, their support teams, and USEF.”

U.S. Para Dressage Chef d’Equipe Michel Assouline was on hand at Tryon to guide the athletes’ experience through the event.

“On the downside, we only had five athletes taking part in this competition, but on the plus side, it gave the younger, newer combinations a chance to develop and learn the pressure of being part of an international team,” said Assouline. “Fiona Howard did well above expectations on her newly acquired Jagger in their very first international competition after only a couple of weeks of partnership. Consistent accurate riding meant that her scores grew every day well above the magic 70% to win the overall championship.”