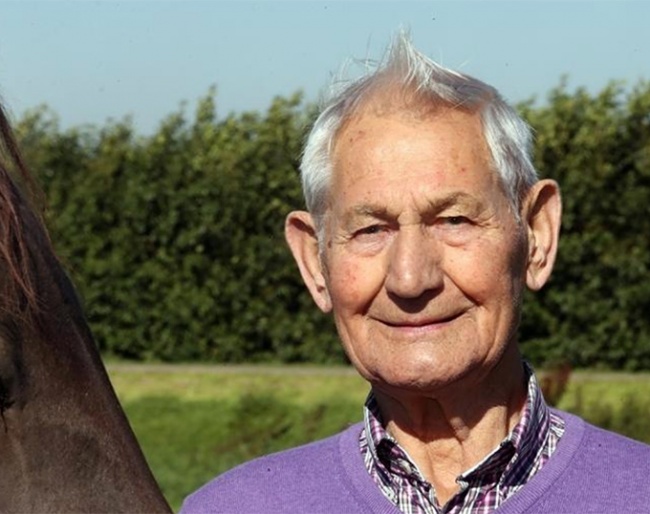 Wim van Arkel, a renowned and long-time breeder of KWPN horses with a particular interest in Thoroughbreds, has passed away at the respectable age of 99.

For 75 years, van Arkel was member of the KWPN society and known as breeder and stallion owner. His breeding programme was built on the famous "Reina" dam line.

Van Arkel grew up on an active farm in the Betuwe area and was surrounded by horses his entire life. He inherited his interest and passion for horses from his parents. They already had a particular interest in thoroughbreds from the start.

Van Arkel's father sold cherries in the late 19th century and travelled to Utrecht 70 kilometers six times a week for four weeks with the same mare. Only a horse with a lot of blood was able to do this in Van Arkel's opinion.

"I remember that my grandfather had to tack up the horse with the head facing the well because she was so hot blooded,' Van Arkel said an interview with KWPN. "This horse also never wanted to follow another horse, he had to be first. In my youth I worked a lot on the land, like my father and grandfather, and we used 'blood horses' for that. There so much quality and character in them, which made them valuable for breeding."

In 1955 Van Arkel moved to Noordoostpolder where he ran his own farm, growing crops, breeding cattle and horses.

His breeding programme started in 1959 when he purchased the mare Areina (by Ulrich) from which he bred the licensed stallions Waldo (by Karolus van Wittenstein), Hurricane (by Abgar xx), and Kapriool (by Grandioso).

The  industrialisation of agricultural farming led to tractors replacing horses and Van Arkel began to breed for sport.  To speed up this proces Van Arkel believed that the use of Thoroughbreds was necessary and he began importing them into The Netherlands.

Wim and his brother Johan imported Ronco xx from the U.K. and he sourced Exkurs xx at the 1977 Stallion Licensing in Cologne.

Taunus (by Koriander out of Wareina (by Exkurs xx) won Grand Prix and World Cups in show jumping under Francie Steinwedell.

Van Arkel was a bright mind and very lively. He followed the stallion performance tests in Holland and abroad.

In 2019 the KWPN celebrated Van Arkel at age 96 during the KWPN mare performance test in which Lady Areina (by For Romance x Andretti x Johnson) participated.

At age 99 he was still present at the start of the 2022 KWPN Autumn stallion performance test in Ermelo on 31 October.

He passed away peacefully in the presence of his children after a very short illness.

"We are grateful for the  long time he was with us. He was a tremendous dad," his children stated. His last words were, "I had a rich and fulfilled life. It's been good."