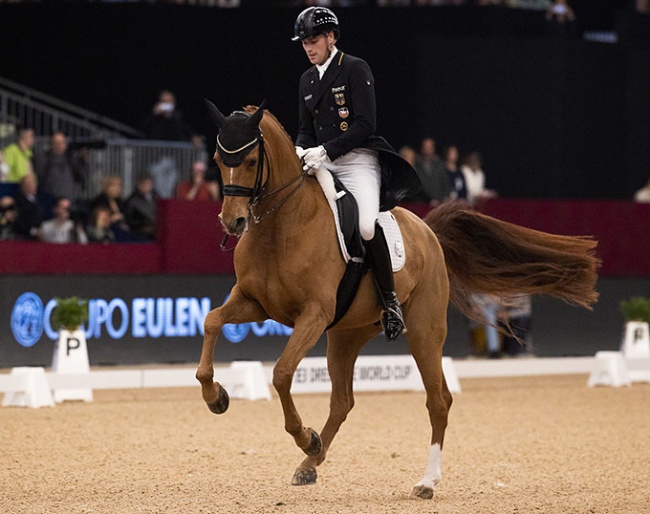 The German pair already showed their strength when winning the Grand Prix by a considerable margin. And this evening they strutted their way to the top of the scoreboard once again with a personal-best result of 84.830% to clinch the all-important maximum 20 qualifying points on the road to the 2023 Final in Omaha (USA) next April.

Runner-up was Wandres’ compatriot Helen Langehanenberg partnering the mare Annabelle while The Netherlands’ Thamar Zweistra lined up in third with the young stallion Hexagon’s Ich Weiss ahead of French athlete Morgan Barbançon in fourth place with Sir Donnerhall ll OLD.

German riders have now won three of the four legs staged so far this season and today’s result leaves Wandres in seventh place on the series leaderboard from which the top nine will qualify.

It was Langehanenberg who first really turned up the heat when scoring 80.035% with her 14-year-old mare. Yesterday the pair finished fourth in the Grand Prix but, as the 2013 series champion pointed out this evening, “we definitely had a better day today. Yesterday she was a little scared to enter in the arena and was very tense during the whole test. Today was much better”, she said.

With just three combinations left to go Barbançon and Sir Donnerhall ll also produced a lovely ride and the 16-year-old stallion was rewarded with a great big hug for his efforts long before his score of 78.220 went up on the board. But then Wandres and Duke of Britain FRH brought the sport to a whole new level, with all five judges ranking them first and awarding multiple 8s and 9s and even a maximum 10 for music and interpretation.

Their score of 84.380% always looked like the winning one but Thamar Zweistra and Hexagon’s Ich Weiss produced the perfect finale to a great competition. The handsome little dappled grey stallion oozes character along with a sense of fun and a whole lot of promise for the future. His lovely forward one-tempi changes contributed to his excellent score of 79.660 and 39-year-old Zweistra has now risen to third place on the Western European League leaderboard behind Barbançon in second and Germany’s Benjamin Werndl in pole position going into the next round of the 11-leg series in London (GBR) in three weeks’ time.

Wandres pointed out this evening that while he knew he and his horse were in great form, he never takes anything for granted.

“Like any competitive person you always have your expectations but you never know how you will end up because the others are also fighters, like Helen, she will always fight hard. I knew after the Grand Prix yesterday we had a little bit of a comfortable situation because we showed already in a very good way. Today I changed a little bit the lines of the Freestyle, the music was the same but there were some different new lines with a higher degree of difficulty, and it worked out very well and we came out with a personal-best!”

Talking about the relationship he has established with Hof Kasselmann’s Duke of Britain he said,  "we know each other inside out, and unless there’s a bomb exploding next to the arena we know we can show what we can show and bring out the highlights - especially in the piaffe!"

"For sure every day is different and you to have to fight, you have to believe in yourself but you can never be too sure because that always brings mistakes in the end. But I know I can trust him and that’s what makes a relationship like the one we have!"

And he believes there is still more to come from this horse who competed on the bronze-medal-winning German team at this summer’s FEI World Championship in Herning (DEN). “To me he means everything, he created my career and hopefully we are not yet at the end. He feels like he is still getting better and better, and today he makes me very proud”, Wandres said.