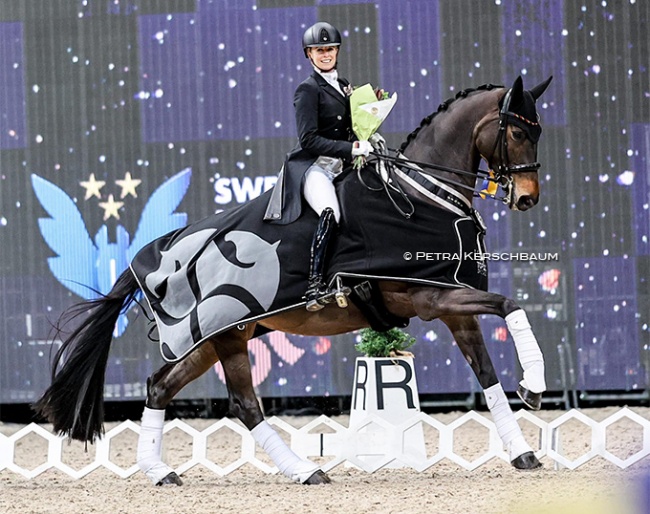 The 5* invitation in Stockholm held its inaugural edition in 2017. Last year's show was also won by Von Bredow.

The CDI Stockholm is an invitational competition to which the "Top 10" ranked riders in the world are invited. Initially sponsored by the car company Saab, the event falls under the patronage of Antonia Ax:son Johnson's company Lovsta as of this year. With a highly attractive purse of money to be won, the top riders are lured to this event instead of the World Cup qualifier in Madrid, taking place the same weekend.

The Top 10 label is more a "quality label" than reality as in the past riders who were ranked in the top 100 participated in the event, which relies on the consultation an advice of Swedish Olympian Patrik Kittel.

With Lovsta having taken over from Saab, the 2022 edition does boast an impressive field of competitors with the biggest absentee being the current World Champion, Charlotte Fry, who has not yet engaged in a head-to-head fight with Von Bredow-Werndl since she won the world title on Glamourdale in August.

Easy Win for Jessica and Dalera

Von Bredow-Werndl and Beatrice Burchler-Keller's Trakehner mare Dalera BB (by Easy Game x Handryk) clocked their 17th consecutive victory in Stockholm. Not even the half-year baby break, which Jessica took over the summer to deliver daughter Ella-Marie, could knock them out of their winning form.

The pair returned to competition in October 2022, winning the World Cup qualifier in Lyon and in Stockholm they no equal in the other 9 competitors in the field. With their signature style of effortless and easy, the pair waltzed through the programme. Maybe in the canter work, the mare became a bit bum high in the tempi changes, for instance, but the entire test looked soft, pretty and easy.

Hosted in the capital, the Sweden Horse Show presented a field of six Scandinavian (Danish/Swedish) riders, three Germans and one Dutch rider. The Grand Prix became a German whitewash with them taking all three top places.

Isabell Werth and the 12-year old Brandenburger bred Quantaz (by Quaterback x Hohenstein) were the runners-up with 78.565%. Co-owned by Victoria Max-Theurer and Werth's long-time sponsor Madeleine Winter-Schulze, the stallion posted 78.565% for second place. Werth rode strong trot extensions and solid half passes. In the first passage the horse was flexed to the right and overall the horse was croup high in them. In the piaffes the horse could come up more in the withers. The walk is Quantaz' weak point, but today he was able to present a better walk extension than usual. There were two hooves overtrack and the rhythl was a bit better. In the collected he became short, almost lateral and tight in the back. Werth rode the canter tour with guts: forward two tempi changes, the zig zag was a bit laboured and there was tension and an unscripted flying change before the right pirouette. The judges ranked her between fifth and second place with 76.848% as low score (Van Twist) and 79.783 (Fransen) as high score.

The 38-year old Benjamin Werndl was riding a very impressive test with Flora Keller's 13-year old Oldenburg Famoso OLD (by Farewell III x Welt Hit II) and the second place seemed in the bag until the horse made several mistakes in the two-tempi changes. The trot extensions were classically correct, the passage was floaty and buoyant, but in the piaffe's the horse could take more weight behind. The extended walk was relaxed and with good overtrack, even though more V-moment should be seen in the rhythm. In the one tempi changes the ones to the right were shorter than to the left. Overall Famoso was elastic in the contact and it all looked soft and easy, the way it should. He posted 78.348% for third place.

It was expected that Cathrine Dufour and the Zinglersen family's  12-year old Westfalian Bohemian (by Bordeaux x Samarant) would challenge Von Bredow/Dalera at the top but today was not their day. The sensitive chestnut gelding has had his "moments" before (in Ermelo, Compiegne) and most of the time, Dufour can expertly guide him through these "phases," instilling confidence, but today the horse struggled with tension in the second and third piaffe and the walk put marks between 6 and 7.5 on the board. They ended up with a score of 73.761% but the judges greatly differed in their assessment. Two had the pair on 71.5% (Ringmark, Fransen), Matthiesen saw a 77.609% in the ride. They placed seventh.

Denmark's best of the day was Carina Cassoe Kruth on Poul Thøgersen's 11-year old Danish warmblood mare Heiline's Danciera (by Furstenball x De Niro). The black mare stands out with her bounce and elasticity in the trot workd: good extensions, lots of bounce in the half passes and with real spring in her step in passage. The piaffes, however, are underwhelming: crossing in front, leaning on the forehand, and just bumping her butt high instead of truly sitting and taking the weight. The extended walk was excellent - courtesy Furstenball. Overall the mare should be more up in the poll throughout the test, as the nose is always a bit tucked in, also in extended canter when the frame needs to lengthen as well as the stride. The two tempi changes were straight, the zig zag very smooth. The passage on the final centerline was lovely. They scored 78.087% for a fourth place.

Cassoe Kruth's trainer Andreas Helgstrand presented Bolette Wandt's 8-year old Danish warmblood mare Queenparks Wendy (by Sezuan x Blue Hors Soprano) but the mare was excused from the test when she started to bleed in the mouth in the walk section. She had bit her tongue and as no hint of blood is allowed in dressage sport, they were eliminated. Helgstrand is ranked 18th on the FEI world ranking, Queenparks Wendy is 52nd.