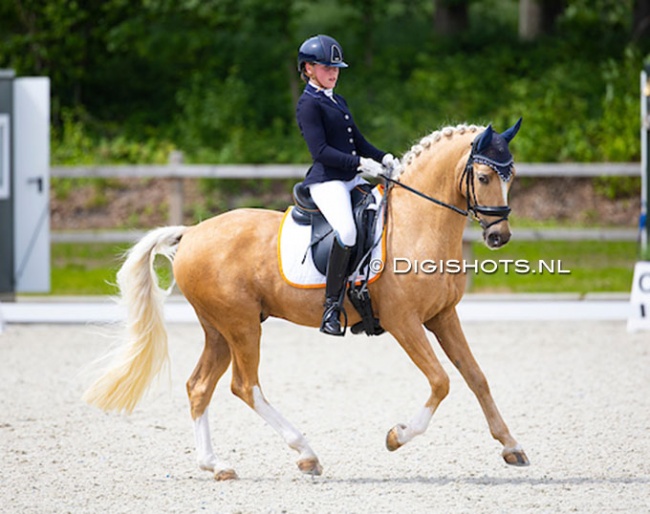 He is bred by Harrie Melis and was owned by Dick Faro and Rijk-Jan Pleijter.

Under Kim Noordijk the palomino first claimed the spotlight by winning the 2017 and 2018 Dutch Young Pony Championships in the 5 and 6-year old division.

He made his FEI pony level debut under Lilli van den Hoogen at her first and only CDI with him, the 2019 CDI Waregem in Belgium.

In 2020 the pair competed in the Dutch team selection trials for the 2020 European Pony Championships in Budapest and were appointed to the team reserve spot.

Lilli van den Hoogen had reached the age limit and the stallion moved on to Bridget Lock. They made their CDI debut in May 2021 in Exloo and got nominaed on the Dutch team for the European Pony Championships in Strzegom, where they won team bronze and placed 22nd in the individual test.

In 2022 Lock and Don Davino competed at CDI's in Le Mans, Lier, Exloo and Hagen, before getting reselected on the Dutch team for the 2022 European Pony Championships, which were again in Strzegom. They got team silver and finished 12th in the individual test.

Don Davino has been sold to Germany as an FEI schoolmaster for Maya Wächter.