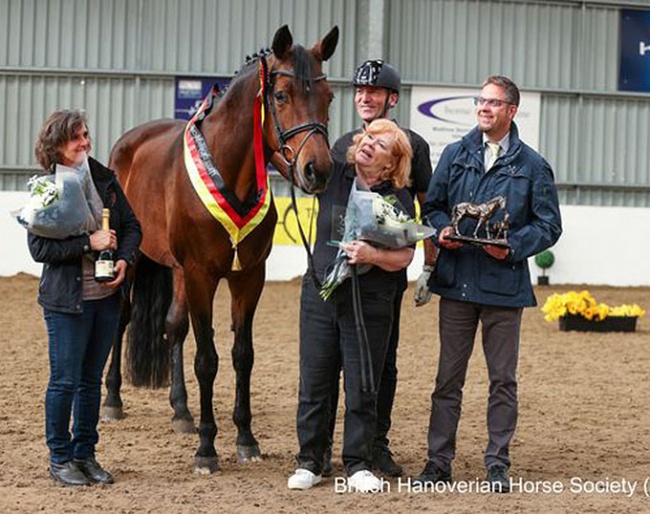 The 20-year old German bred Hanoverian mare Dornroschen has been named "Mare of the Year" at the 2022 British Hanoverian Annual Breeding Show on 22 - 23 September 2022.

Bred by Manfred and Karin Hoerner and acquired as a foal at auction by Lynne Crowden of Woodlander Stud, Dornroschen is by Dimaggio out of Claire (by Caprimond x Der Clou).

Dornroschen won the 2008 British Young Horse Championships as a 6-year old, beating Valegro and the 2009 British Dressage Championships at Advanced Medium Level and in 2011 at Prix St Georges level.

Ridden by Michael Eilberg the duo made its international show debut at small tour level at the 2012 CDI Vidauban, where they placed fourth in the Prix St Georges and won the Intermediaire I. In 2015 they competed in the medium tour and by July 2015 they contested the senior Grand Prix classes. In 2016 the pair showed only in Valencia, Roosendaal and Rotterdam.

Dornroschen combined a career in sport with breeding (through embryotransfer). She produced the double Young Horse World Champion Woodlander Farouche (by Furst Heinrich), as well as the now 5-year old licensed stallion Franz Ferdinand (by Furst Heinrich) and the stallion Freddy M (by For Compliment) and the newly licensed Oldenburg Stallion For Kingdom (For Emotion).