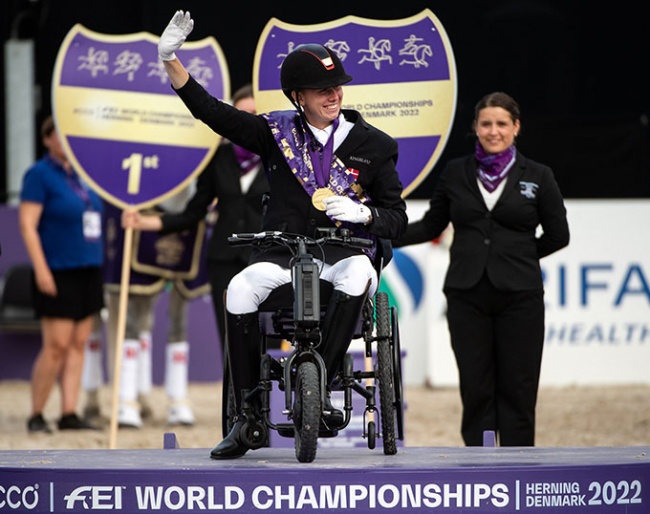 At the 2022 FEI General Assembly in Cape Town (RSA) on 10 - 13 November 2022, the Para Dressage Committee presented its annual report.

The main focus of work for the FEI Para Dressage Committee for 2022 has been the full rules revision, with major amendments including the introduction of a new competition structure designed to provide a more progressive and appropriate entry level for those new 4 to the sport. In addition to the main discipline rule book, the Committee also carried out a review of the Classification rules and Paralympic regulations, and of the education systems for Judges, Stewards and Classifiers in Para Dressage. A new education programme will be launched in January 2023 which aligns with the other FEI disciplines.

A key component of the review processes were the Para Dressage Forum in January 2022 and the FEI Sports Forum in April, where the FEI Para Dressage Committee heard the views of the community on the rules revision, Para Dressage tests, education, classification, competition formats and ideas for the future development of the sport.

Moving forward, one of the Committee’s main aims is to grow the discipline and attract more Athletes from new nations. Having received a positive response at the Forum, the Committee is now planning to introduce an FEI World Challenge for Para Dressage, in collaboration with the FEI Solidarity Department, and have drafted rules for the new competition to launch in 2023.

Alongside successful FEI Para Dressage World Championships held in Herning in August, all Individual and Team tests across all grades were observed (and received marks for their tests) using the Dressage Judging system. The Technical Committee will now decide if the “e-Dressage” system can be adopted for major Para Dressage Championships going forward.

The Chair also mentioned the Para Equestrian Digest started by the FEI Communications Department to bring attention to the social barriers that our Athletes face, while highlighting the therapeutic value of the horse-human connection. The Digest aims to keep Para Equestrian in the spotlight throughout the Paralympic cycle, rather than just focussing attention around the time of the Games.

The discipline has achieved another important international position with the appointment of Brazilian Athlete Rodolpho Riskalla to the World Anti-Doping Agency (WADA) Athlete’s Council. Rodolpho was elected as one of only eight athletes elected from a nomination pool of 34 candidates.

The General Assembly approved all modifications to the Para Dressage Rules, including changes to the level system to FEI Dressage Judges that delegates voted for in the Dressage rules.

All changes to the Para Dressage Rules can be viewed on the FEI website in due course.