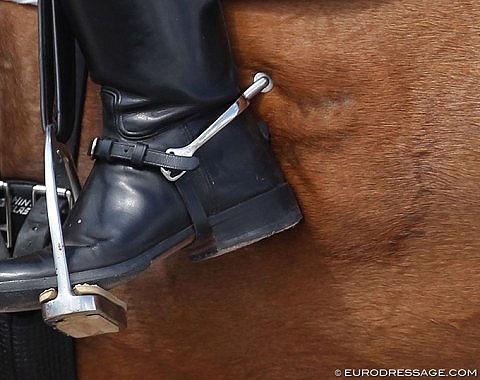 by Minna Tallberg, who previously contributed the column "Stakeholders Benefit from a Status Quo"

Minna Tallberg (FIN) is a former equestrian photographer and freelance journalist, who now works as a horse trainer and writer of horse training books. She has a special interest in learning theory, behaviour, and welfare issues. She has two vocational animal training qualifications and holds webinars and live lectures on horse training and behaviour in Finnish, Swedish and English.

“You can’t use force anymore”

The decision was taken after a statement by the ministry responsible for animal welfare regarding aversive training tools. The date was set when all equipment used in training causing pain or fear was to be handed in. From this day on, no training methods based on physical coercion or frightening was allowed. The trainers were stumped and asked: “If we’re not allowed to use the equipment we were using, how do we train instead?”

A bedtime story I just made up? No. This actually happened in Finland, as the now retired head of border guard dog training, Juha Pasanen, told horse people in his lecture in September. Several equestrian organisations, including Hippos (trotting and breeding), the Finnish Equestrian federation (riding), Hippolis and several equine colleges arranged a seminar on horse welfare. Dr. Janet Jones’ webinar delved into what the horses’ brain is capable of and what not, Essi Wallenius shared the new project in developing a welfare quality protocol for equines and I had the opportunity to speak about how horses learn and what we can do to make training more efficient and welfare orientated.

Pasanen, now team assessor for the EU border guard Frontex, spoke about how the Border Guard in Finland changed the way dogs were trained from using punishment as a part of training (including shock collars) to using reward based training methods. While changing the ways you have been doing things for decades was painful, it wasn’t impossible. The result? Dogs that work at least as well as the previously trained ones, and whose welfare is better. And as a result, dog handler welfare also increased. Yes, it took years. But it was worth the effort.

According to a recent review published in Animals, “Social Licence to Operate: What Can Equestrian Sports Learn from Other Industries?” the need for the equestrian world to change is right around the corner. Or in front of us all. “Public attitudes about animal use are also affected by advances in scientific knowledge. This is underpinned by the growing recognition that animals are sentient creatures [56,57] for whom physical, mental, and social wellbeing are important [50] and by the growth of animal welfare as an established science [58].” This is happening right now.

Another key quote with regard to recent discussion within the equestrian world: “Communication strategies that have been shown to be unhelpful include dismissing public concerns as reflecting lack of knowledge or understanding [2] and adopting a defensive or aggressive response to criticism [9]. Similarly, attempting to ‘educate’ the public in ‘the truth’ about equestrian sport is not effective, unless it displays shared values with all stakeholders [4].”

Juha Pasanen’s lecture on how change was effected within the Border Guard dog training showed several interesting parallels with the current equestrian situation. The dog trainers themselves did not drive the change, the motivation came from above, i.e. the boss. The Border Guard is a military organisation and as such, change is easily implemented from the top, and in Pasanen’s words, anyone not willing to walk the talk and change training methods to ensure better dog welfare would have been sacked.

Of course this is not the way change will happen in the equestrian world. There is no boss, and the FEI for instance has shown that it will suggest change only when it is forced to. But I put it that the boss is the society around us, and that pesky new phrase SLO (Social License to Operate). When society asks questions, like “why are you using metal rods to poke your horse in the sides” or “why do you hit the horse with a whip when it won’t jump” we need to have answers that are a) true b) in tune with the modern view of animals, not those from two thousand plus years ago. Or, we change so that our training methods are ethically viable. It’s possible.

If using force, causing the horse pain or fear, is outlawed, what then? No, you may not use the argument that you cannot force a horse to do anything it doesn’t want to do. That one has been showed untrue so many times now it won’t wash. I’d also like never to hear nor read about horses biting and kicking each other as an explanation for hitting or kicking horses either, ever again. Just quit riding and showing? No.

Horses learn very quickly and they have a frighteningly good memory. Horses can be motivated to behave in a certain way by many different methods, only some of which are ethically unsound. What you lose when you stop using force you get in using systematic desensitisation (making it possible for the horse to habituate) and sensitisation (making it possible for the horse to learn the aids and other cues) and gradually increasing demands so that the horse can learn. Horses are motivated by many things: release from pressure, including fear and pain but also very much smaller pressure, like a fly tickling the hair of the horse; moving, resting, company of other horses, food, scratches, exploring, using its’ body in different ways. The only one who gets to decide what reinforces behaviour is the horse.

Remember, denying there is force is not an option anymore. It’s there for anyone to see. With less force, with pressure used only to enable it to be stopped, reinforcing the correct behaviour, not to force the horse to exhibit it, you will need more repetitions. This is true for any reinforcement you wish to use. Horses learn to bang the stable door in very few repetitions if it leads to their feed being given. You don’t usually want the horse to learn and remember things from just a few repetitions, because you may not be a perfect trainer yourself. With moderate motivation – just a few pellets of feed, just a tiny irritating bit of pressure – comes a need for more repetitions. Then the behaviour will need to be established by generalising it, practising in different situations, with different riders, varying equipment, and that most demending of all for our horses, in unfamiliar situations, alone.

Do you want to respond to this column, do you differ in opinion? Eurodressage loves to hear from you. Feel free to send a "letter to the editor" and contribute to the discussion: info@eurodressage.com

Related Links
Minna Tallberg: Stakeholders Benefit from a Status Quo
Dr. Inga Wolframm: "What is a Piece of Tack?"
David Hunt: The Double Bridle as a Sport Issue, not a Welfare Issue