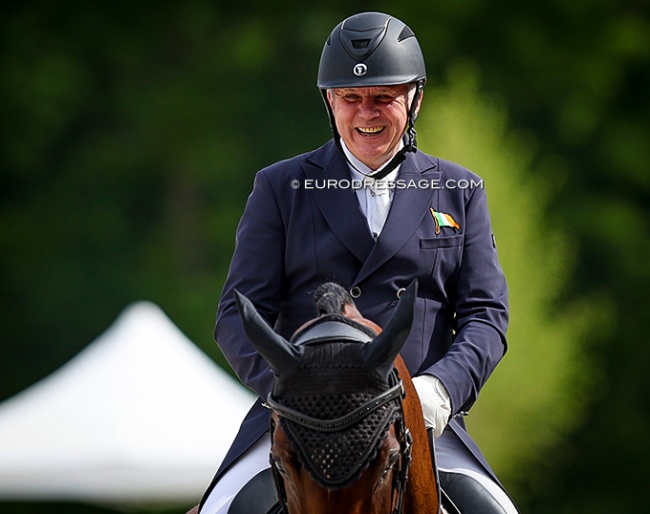 Dane Rawlins is a British born dressage rider competing for Ireland.  He competed at the 2013 and European Championships in Herning and was the founder and dressage show organizer of the CDIO Hickstead. He is a List One judge, international competition organiser and equestrian consultant. He has coached dressage and eventint riders at the 2000 and 2012 Olympic Games and 2014 World Equestrian Games.

Dane rings in on the IDTC/IDRC Joint Letter debate to which David Hunt, Dr. Inga Wolframm, and Minna Tallberg have supplied columns for Eurodressage.

We have entered and are in the midst of a new age. People are prepared to opine and protest upon so many subjects that it becomes an almost impossible task to separate fact from fiction. Science is nearly always used to create ‘facts’ of the most diverse nature to argue points.

How do we, as dedicated and caring horsemen and women, see the wood from the trees? The reality is we have certain people claiming to represent various angles of horse welfare, who would pull down the sun on the ground that its rays can be harmful.

The current argument regarding the use of spurs, double bridles, and snaffles in competition can infuriate some, enrage others, and leave many true horsemen and women really exasperated. We know that the misuse of tack can cause harm.  The spurs as an option for me are a non-issue, as a wide range including dummy (effectively non spurs) have been in use for quite a while now. Many national federations permit snaffle or doubles in advanced classes with very varied results. This discussion, as I understand things, is about international levels and standards.

A good trainer should know what is in the tack room, then learn how and when to use it. This all whilst maintaining the highest standards of horse welfare and keeping to the simple traditions of correct training as developed over many hundreds of years.

Xenophon 431 BC to 354 BC was a Greek cavalry general, who was clear in his treatise of the horse. The horse responds best to humane and considerate treatment. He stated:

"through the accident of having for a long time 'ridden' ourselves, we believe we have become proficients in horsemanship, we wish to show to our younger friends how, as we conceive the matter, they will proceed most correctly in dealing with horses.”

This has developed into the sport that we know. Horse welfare is rightly at the top of the agenda.

Change Rules Based on Faux Science

Yet we have many of limited experience attempting to change the rules based on faux science. All too often dismissing the opinions of older and vastly experienced Trainers in favour of the current fads, the cry of the failure to progress often being a rallying call.

Of course, we as horse people and horse lovers should always be open to real issues concerning welfare, but to sacrifice all of the improvements of centuries to keyboard warriors on a mission, often based on limited knowledge, cannot be correct.

The vast majority of riders care greatly for their horses, often sacrificing much to achieve their goals. They should be respected and applauded, not tarred with false claims of abuse by the unknowledgeable. Are we really to allow this so-called public opinion created by a few to affect the many?

The training of the dressage horse has progressed over hundreds of years to the now standard methodology of developing a horse with its individual traits, and with empathy and humanity. Competitive dressage culminates in the Grand Prix. The horse is to be presented in the double bridle to show the most difficult movements. The adjudgment of this is by qualified and experienced members of the judging community. They are responsible not only for the correct performance but, along with stewards and vets, that the horse is not abused.

As the breeding of horses has improved along with the training, more horses are available on the market to be purchased and ridden by riders who may not have been through the rigours of training but who are able to short-cut the process and jump into the higher levels.

This leads to many more opinions which quite frankly are flawed by the lack of deeper understanding of the whole process. This leads to the alternate method theories that seem to abound. The latest is to permit all to choose which bits are used. This is the slippery slope. What next? The current bits permitted are not a welfare issue in dressage. Should Formula One slow the cars down so that lesser drivers can catch them up. Maybe Raphael Nadal should not serve so quickly.

Dr Inga Wolframm quite rightly comments upon the right tools in the right hands, further stating that it takes a certain level of experience and expertise to use them safely and effectively. This is the crux of my argument. My point is that international riders, particularly at Grand Prix are the right hands, with the experience. Therefore, it is incorrect to blame the tools and their application because of perceived perceptions.

The requirements are a sport issue. The highest standard is to compete internationally. The horse and rider must perform the required movements of the small tour to Grand prix in the required tack including a double bridle. To be blunt, if some cannot manage this perhaps, they are in the wrong sport or do not yet have the required expertise to achieve the highest level?

Above all, we as an Olympic sport must take responsibility to explain and ‘sell’ our sport more clearly to as many as we can. Public opinion is having a great effect upon our social licence. As a sport we are responsible for its acceptance as the sport we wish to pursue.

Related Links
Minna Tallberg: Stakeholders Benefit from a Status Quo
Dr. Inga Wolframm: "What is a Piece of Tack?"
David Hunt: The Double Bridle as a Sport Issue, not a Welfare Issue
Joint Letter from IDRC/IDTC Sparks Controversy and Debate on Social Licence
Eurodressage Training Article: The Double Bridle: An Instrument of Understanding