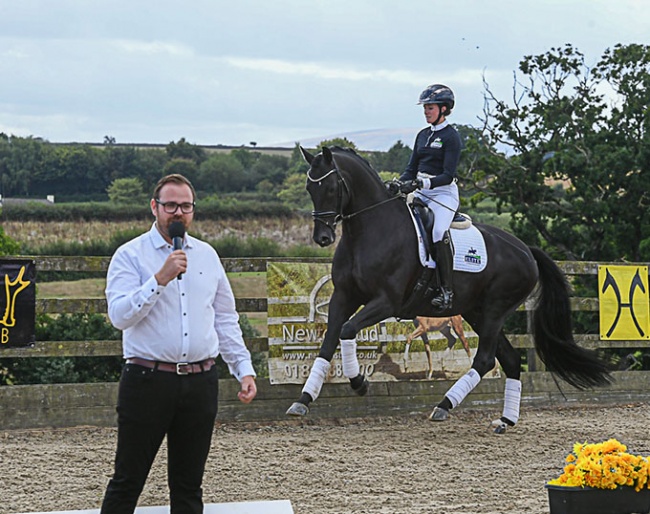 The Elite Dressage team continues to build a world class reputation for the breeding, training and sales of topflight dressage horses.  This August they hosted their annual Open Day at Newton Stud, next door to Anna Ross’s Elite Dressage training centre in Devon.

This annual event celebrates the latest foals from their comprehensive breeding programme being graded by the U.K. studbooks and is also an outstanding opportunity to view some of the very best of British sports horses available; there was a selection of foals from top bloodlines such as De Niro, Damaschino, Bonjour and Fidertanz all presented for viewing alongside expert appraisal from the panel of studbook inspectors.

This was the first opportunity since Covid for the Elite team to open their doors to all and, as usual, they were in fine spirits with a champagne breakfast kicking off the event and an all-day gin bar to keep the day in full swing.

From the outstanding collection of foals presented to the European Studbooks, seven were awarded Elite status and another 21 Premium status.  The audience were clearly impressed with over twenty sold, including a stunning Bon Coer x Don Shufro x De Niro to French national champion and US Para Olympic team trainer Michel Assouline, a Furst Jazz x De Niro x Rubinstein as a prospect for U.K. U25 team rider Dylan Deutrom, who rides for Team Hicks Equestrian, and an another three foals go to Holland for Dutch Olympic Team rider Diederik van Silfhout.

Martin Klavsen from Blue Hors Stud led a demonstration alongside Elite’s head rider Beth Bainbridge celebrating the success of their breeding stallion Blue Hors Zackorado, who has been based at Elite Dressage for the 2022 season .

‘Zacko’ and Beth burst onto the GB competition circuit this summer and will be representing Great Britain in the 6yr old class at the Dressage World Breeding Championships in September.  This impressive black stallion took the event in his stride demonstrating fantastic cadence and power combined with clear rideability – their demo concluded in the pair enjoying a lovely gallop across the Stud’s fields behind the arena.

Competition Mares in the Breeding Programme

This fun action-packed day culminated with a ridden demonstration from Anna Ross on her own and Marcelo Tosi’s highly impressive young Grand Prix mare Habouche who was presented alongside her three year old daughter D’abouche ridden by Milo Johnston.

This mare is one of a number of highly successful competition mares that underpin their breeding system, producing several foals every year whilst remaining in work through their sophisticated embryo transfer programme.  2 of her foals from this year were awarded premium status in their gradings during the day, including a stunning black filly Inca Jay owned and bred by Beth Bainbridge; “The sky’s the limit with this girl, I can’t wait to see her grow up”.

The entire 2022 foal collection is available to view at www.elitedressagehorses.co.uk along with a range of other youngstock and ridden horses available for sale.