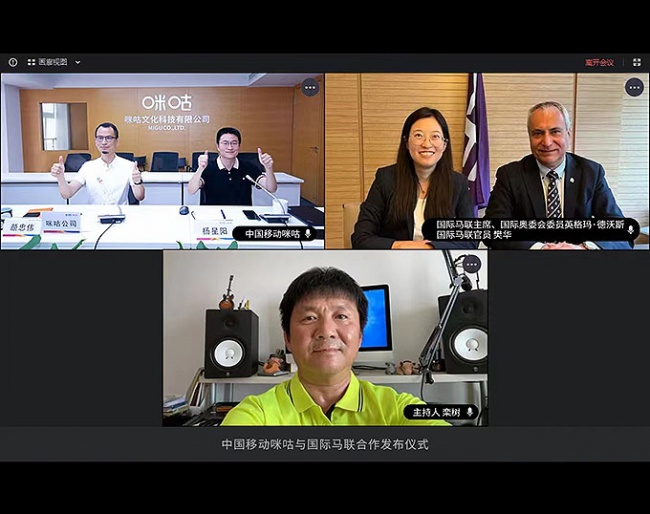 On Friday 5 August, FEI President Ingmar de Vos attended an online ceremony held by Migu, a subsidiary of telecom giant China Mobile, to celebrate the launch of Migu’s equestrian channel and the live-streaming of the 2022 FEI World Championships in China for the first time in history.

Migu, the rights-holding online live broadcasting partner for the Tokyo 2020 and Beijing 2022 Olympic Games, is a leading live broadcasting platform in China for comprehensive digital content especially in the sporting domain. As part of the strategic partnership with the FEI, Migu will live stream the FEI World Championships 2022 in Herning (DEN), Pratoni (ITA) and Verona (ITA) on the newly launched equestrian channel.

Alongside providing live content from the World Championships for the first time to a growing Chinese equestrian audience, part of the events will also feature Chinese commentary, while highlights programmes will be available On Demand.

With China being one of the key equestrian markets for the future, the FEI has been actively developing its presence in recent years in order to introduce and promote the sport with the broader Chinese public through the creation of official accounts on Chinese social media channels, as well as hands-on development initiatives including the hiring of a Regional Solidarity Manager to develop training programmes for equestrian coaches, officials and vets.

“We are convinced that our partnership with Migu will contribute in an important way to a successful expansion,” FEI President Ingmar De Vos said.

“We work closely with the Chinese Equestrian Association and we can see the equestrian community in China developing rapidly and embracing all things related to equestrian. From hosting top events, to developing a strong network of clubs and promoting horsemanship and the equestrian lifestyle, there is a real vitality to the Chinese equestrian landscape. And this year, with the livestream of the FEI World Championships for the first time in China and the launch of Migu’s equestrian channel – this is again another important milestone!

“This dynamic growth of the sport - and the engagement from the next generation of athletes and fans is so important for the global equestrian family. We are ecstatic to partner with Migu so that we can ride this wave together and keep on growing the sport around China with the live streaming of Top Sport and an array of content which will delight Chinese fans and equestrians.”

“It has been a great honour for us to become the only partner of the FEI in China to live stream the FEI World Championships 2022. We also look forward to the full cooperation with the FEI and Mr. Alex Hua Tian. On 6 August, the FEI World Championships, held only every four years, will get under way and we will be there to mark the moment.  With the mission of ‘creating the ultimate experience of sports stories’, Migu Sports will rely on China Mobile’s 5G+ leading advantages to broadcast exciting events on Migu’s multi-platforms,” Mr. Yan Zhongwei Deputy General Manager of China Mobile Migu said.

“In the future, Migu will continue working with the FEI to exploit the unique combination of the FEI’s intriguing top equestrian events and China Mobile's extensive user base, leading technology and event operation experience, bringing more immersive, more professional and more diversified equestrian sports content and services to the audience, in order to develop equestrian sports in China, and to promote Chinese sportsmanship.”