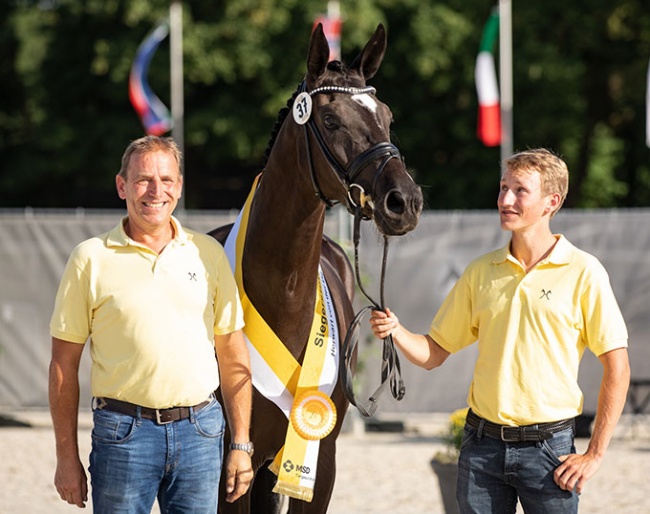 Exclusive (by Escamillo x Fidertanz) was named champion of the 2022 Hanoverian Elite Mare Show in Verden on 3 August 2022.

Under a bright sunny sky Hann.Pr.A. Exclusive, bred and owned by Johannes Westendarp from Wallenhorst, took the lead in the group of 55 mares at the Herwart von der Decken show, the annual mare championship for the Hanoverian breed.  On the same turf, where her sire Escamillo became reserve World Champion of young dressage horses a year ago, the black beauty was able to convince judges Ulrich Hahne, Heike Kemmer and guest judge Sönke Rothenberger.

"She was brilliant with a good impulsion and great dynamics in trot and used the walking ring to win over the judges as well," said Ulrich Hahne full of compliments.

The first dressage mare to enter the triangle was Hann.Pr.A. Barcelona (by Baron x Don Diamond), whose performance secured her the title of reserve champion mare. Bred and owned by Herbert Linz, Barcelona was a very special mare for the judges, as she showed herself beautifully and with a good rhythm.

The Friedrich Jahnke Prize, which is awarded annually to the highest scoring family of the current show season, was awarded to the three daughters of St.Pr.St. Faconnable. The Fürst Heinrich x Calypso II-daughter produced a top family with daughters St.Pr.St. Barcelona (by Belissimo M),  Hann.Pr.A. Brasilia (by Belissimo M), and Hann.Pr.A. Bogota (by Baron). All mares are bred and owned by the Brüning family from Ochtmannien.

In the group of 17 jumping mares battling it out for the champion's title it was Hann.Pr.A. Olympia (by Ogano x Diacotinus) who received the champion sash. She is bred and owned by Enrico Messelis and comes from a line of winners. Her dam,  Hann.Pr.St. Dinara (by Diacontinus x Quintender) was the Hanoverian Elite Mare champion five years ago.  Reserve champion was Hann.Pr.A. Sofia Lolita (by Stolzenberg x Valentino - breeder and owner: Stefan Kleine).

The Hanoverian breed societies also decorates mare with "halfblood" pedigree. This year the champion was Hann.Pr.A. Stine Bö (by Signum xs x Carismo), who is bred and owned by Helmut Böttcher.