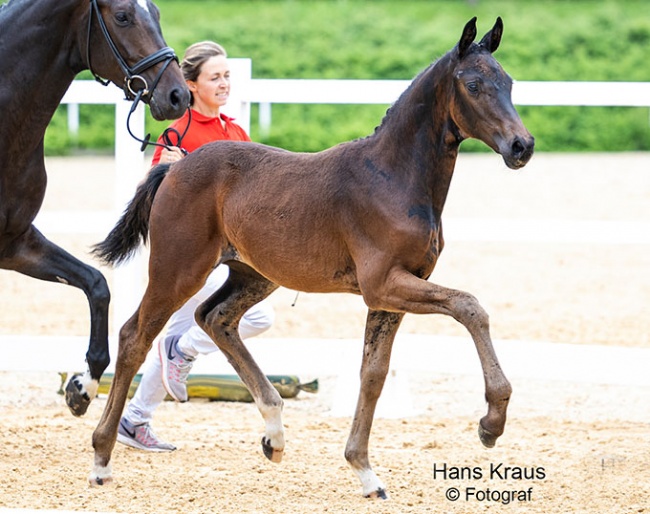 The filly Syilvette became the price highlight of the 2022 Austrian Warmblood online foal auction of which the bidding concluded on 31 July 2022.

A collection of Austrian bred dressage foals was on offer.

The dark bay Sylvette is by For Romance out of Sylvie (by Quantensprung x Foundation). She is bred by the Pichler family out of dam Sylvie who was fourth placed at the 2021 Austrian Warmblood Elite Mare Championship.

Offered for sale by Karin Dirisamer, Sylvette had bidders from four different countries and in the end sold for 24,000 euro to Spain.

For Romance in Demand

The second most expensive foal was the chestnut colt Broadmoars Fur Dich (by For Romance x Dannebrog), which sold for 15,500 euro to an Austrian buyer.  His dam is the full sister to licensed stallion  De Bruyne, who has been competing in the young horse classes under Matthias Bouten.

The third best selling foal was another For Romance, the black filly Shirley Sue. She is out of a Don Frederico x Almox Prints J dam and fetched 12,000 euro.

Foals from the Alps

S'Bondgirl (by Bonds x Contender) sold for 10,000 euro. She is the half sister to the licensed stallion Quantender.

Vom Feinsten (by Viva Gold x Fiderbach) sold for 7,250 euro. He is the full brother to the 2021 Austrian Warmblood Foal Champion.