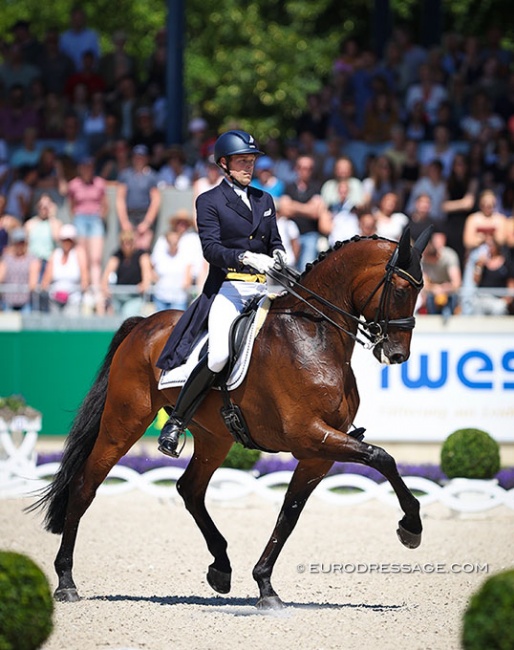 Finnish Olympian Henri Ruoste and Jochen Arl, the co-owner of his number one ride Kontestro DB, have reached a mutual agreement to retain the horse for the 2024 Olympic Games in Paris.

Ruoste and Arl have been long-time business partners in the scouting, training, competing, and the sales of the highest quality dressage horses. The Belgian warmblood gelding Kontestro DB, however, is pulling their heart strings and the duo agreed they want to enjoy the journey to Olympic glory instead of responding to the many sales request for this horse.

Rise to the Top

Ruoste and the 12-year old Kontestro DB (by Contendro x Cassini II) made their international Grand Prix debut in February 2020.

After gaining mileage in the arena, the pair achieved a first career highlight at the 2021 European Championships in Hagen, where they were sixth in the Kur Finale with 82.600% after scoring 77.314% in the Grand Prix.

Slowly climbing the ladder, rung by rung, towards to absolute top, Ruoste and Kontestro DB celebrated massive success at last weekend's CDIO 5* in Aachen, where they were third in the Grand Prix (76.783%) and Special (76.404%).  Their much beloved freestyle music, based on the popular Tom Cruise movie Top Gun, thrilled the Aachen crowds and landed them a fifth place with 82.735%.

"It was really amazing to compete in the arena in front of a big audience with a flawless performance. Konsta was great. He was with me, relaxed and the feeling in the saddle was really sweet", Henri Ruoste stated.  "My horse was really focused and calm in the freestyle. He went into the arena calmly every day, even though the situation was new and the atmosphere is very big there."

Henri's electric gelding is coming of age and finding more rest and relaxation in the show ring, despite the charged atmosphere. In Aachen he performed to a sell-out crowd of 6,300 people.

"I always went in after the winner, Cathrine Dufour, so it's never the quietest moment to enter with people standing and applauding. However, Konsta was calm, with me. He is now more mature and more experienced. As a rider, I close myself off from everything around me. The environment has a great effect on the horse's concentration, so I need to stay focused as best as I can."

Herning and Paris on the Horizon

The glorious scores and top three placings in Aachen boasted Henri and Jochen's confidence that Kontestro is a medal candidate at the 2022 World Championships in Herning with the 2023 Europeans Championships and the 2024 Paris Olympics on the horizon.

"We so enjoyed how relaxed and confident the horse went in Aachen and know that he has all the talent and potential to be on the podium one day," Jochen Arl commented. "Henri and I therefore agreed to pull Kontestro DB off the market and keep him for ourselves to enjoy. We both love to go to Paris and see him go down the centerline in the gardens of Versailles. And maybe Henri can write history for Finland there."

While Kontestro DB has been struck off the sales list, the barn is still full with promising stars that are for sale.

"Konsta will now spend a week in the pasture on holiday, before we pick up training again for the World Championships in Herning," Ruoste said. "In the meantime I can also focus on the youngsters in the barn. We have a fabulous 9-year old young Grand Prix horse at the moment we think has even more in the tank than Kontestro."