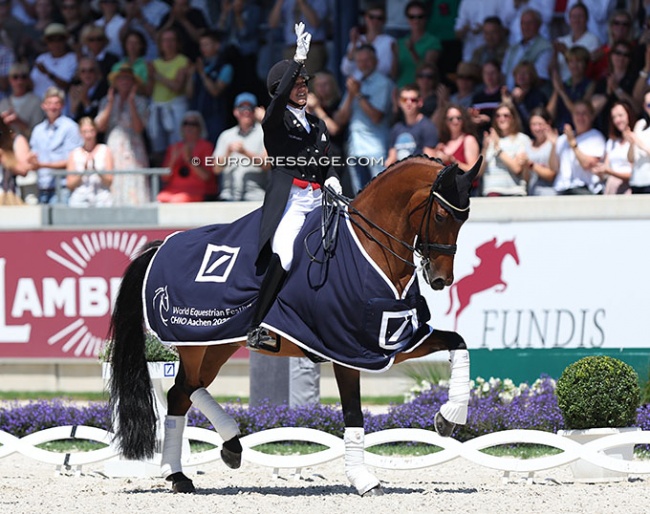 With an impressive feat of scooping up five wins out of five starts, Danish Cathrine Dufour became the 2022 CDIO Aachen Grand Champion after floating to the 5* freestyle victory on the closing day of competition, 3 July 2022.

Dufour's name was immediately engraved on the silver Wall of Fame at the show jumping arena and is now listed amongst dressage legends and Aachen all-stars Josef Neckermann, Dr. Reiner Klimke, Christine Stuckelberger, and Isabell Werth amongst others. In 2018 she was also named Aachen Grand Champion with Cassidy as overall winner, but did not get her name engraved as she didn't win the kur.

The 2022 edition of the CDIO Aachen was one full of grandeur. After a 2020 cancellation and 2021 "light" edition due to the corona "pan-drama", the "CHIO" was back in full force and drew a crowd of 356,800 visitors over a course of 12 days. On Sunday morning the 5* Freestyle brought afoot a crowd of 6,300 with tickets sold out a year in advance.

The event was blessed with gorgeous summer weather and with the World Championships Dressage taking place next month, Aachen carried much importance for the team selection process for Germany, U.S.A., Denmark and Spain. The Deutsche Bank stadium was buzzing with excitement as riders fought for a team spot and proved themselves in front of the panel of judges one last time before Herning.

Saturday's competition day was a major roller coaster for several nations. Some horses were not on best form and Germany's 13-time Aachen Grand Champion Isabell Werth got eliminated on Quantaz for blood in the mouth. It was not the first drop of blood spilled that day. No less than five horses in total were eliminated on Saturday, including two young riders in the afternoon class, as well as U.S.A's number one Adrienne Lyle on Salvino and her student Katie Duerrhammer on Quartett. Team USA had an off day as Charlotte Jorst a-typically went off course and the news of Ben Ebeling getting sued put a damper on the experience.

Dufour Undeterred to the Title

Nothing rocked Cathrine Dufour's boat though. After collecting two victories in the 4* tour with Bohemian, and two 5* wins on Vamos Amigos the days before, the young Dane held all the right cards in her hands for another whopping victory in the freestyle.

Riding to brand news music that was rather non-descript and failed to touch one's heartstrings compared to her Les Miserables music, Dufour shone with the 10-year old Westfalian Vamos Amigos (by Vitalis x Hotline) from a technical viewpoint. The horse looked better in the connection, less creeping behind the vertical and avoiding the contact. The passage was very electric and with a rhythm like a metronome. The trot and passage half passes were smoothly ridden in combination. The extended walk was good, but the horse could swing a bit more over the back. The piaffes were on the spot and rhythmical, but the frontlegs were wide, showing a lack of balance. Vamos did not make any mistakes, the tempi lines were correct, but overall the horse lost some stride and elasticity in the top line, losing ground cover in the ones. Dufour really rode her horse with so much precision and feeling and the fact that he stood still calm and collected like a rock while the crowds erupted into a roar was a great sight. Vamos also walked out of the arena on the long rein fully relaxed and at ease with the charged atmosphere, a sign of a horse that can be hot in the work, but balanced and calm in the mind.

The panel of judges, consisting of Anne Gribbons, Susanne Baaru, Elke Ebert, Mariette Sanders-van Gansewinkel, and Christof Umbach, rewarded the ride with a winning 88.375%. All five of them had the pair first.

“It is a huge dream to perform like that in five classes with two different horses,“ said a thrilled Dufour at the press conference, who collected almost 130,000 euro in prize money over the course of five days. The rider explained that her music is from the Martial Arts movie Warrior and "describes what it is like to fight your way to the top, the  daily struggle and then to go on to ride the freestyle in Aachen.”

Frederic Wandres and Hof Kasselmann's 15-year old British Hanoverian gelding Duke of Britain (by Dimaggio x Rubinstein) were second in the Grand Prix and Special and big mistakes needed to happen to his test for the judges to imagine a different ranking for the pair in the freestyle.

Wandres' 1980s freestyle is a crowd pleaser and Evelyn Thomas' 1984 track "High Energy" really highlights the piaffe-passage work, bringing it to an emotional climax at the end. The pair began with a fantastic first piaffe and held a good rhythm and flow through the trot and pi-pa work. The extended walk was good, the collected a bit tense and overall Duke of Britain could be chewing on the bit more. The two tempi changes were big and uphill but there was a hiccup in them. Wandres delivered and also at the end he did not lose his patience and waiting for the final halt to be properly executed before raising his arm in a modest cheer.

The pair posted 83.880% for a third second place and established itself as the best performing German duo of the show.

"After the World Cup Finals we disappeared for a bit," Wandres said at the press conference. "I wanted to jump out of this forced position of always being first reserve. So, so far so good, now let's hope we are on our way to Herning."

Bachmann on the Rise

Denmark's Daniel Bachmann Andersen rode the 10-year old Marshall Bell (by Don Romantic x Michellino) only eight times before heading to Aachen to claim his spot on the Danish team.  The sale of the tall liver chestnut by co-owners Andreas Helgstrand and Christian Vang Lauridsen left Daniel without a team hopeful all of a sudden, until new owner Nicola Ahorner realized she didn't want to steal Daniel's dream and returned the horse on loan for the summer in exchange for future lessons and guidance as she prepares for her senior Grand Prix start with the hope of riding at the Paris Olympics.

Bachmann and Marshall Bell improved with each ride, going from an 11th place in the Grand Prix, to 6th in the Special and a mind-blowing third in the freestyle. Their music did not enthral at all, but from a technical perspective the rider showed much skill in piloting this green Grand Prix horse through the test. Marshall Bell was quite strong in the contact - a point to work on - but he executed a fault-free test with a nice trot and passage half pass line followed by piaffe. The trot extensions were ground covering, but the last one not as regular in the rhythm. The extended walk was good, the collected slightly tense. The two tempi changes were huge and they finished with a super expressive piaffe and one handed passage.

"At the moment it hasn’t really sunk in yet, sitting here and after our journey," he said at the end of the class. "I am so proud and happy about the development over the days since we have been here. We grew back together and it worked out well. We changed a few things in the training. A little bit less of this, more of that. This experience has strengthened me and I am really proud."

An interesting note is that the Aachen freestyle winner (Cathrine Dufour) and third-place getter (Daniel Bachmann) are both trained by Nathalie zu Sayn-Wittgenstein. Although the Danish equestrian Federation decided to part ways with the Danish coach in the autumn of 2021, these two riders decided to stick with her for guidance and expertise. They reaped the fruits in Aachen. Dufour also regularly gets input from Kyra Kyrklund, the Finnish legend who coached Zu Sayn to her successes in the saddle, so Daniel has decided to copy that formula.

"I have been training with Nathalie for quite some years, especially since I've been out on my own. I decided to bring in Kyra too with her sharp eye. I'm inspired by Cathrine," said Daniel. Dufour immediately rung in and added, "with their experience on the ground I feel super safe."

Swedish routinier Patrik Kittel knows how to play the freestyle game and is one of the few riders who really makes an effort at having outstanding music for his horses. He knows that Kurs score when they are filled with recognisable hits that make you clap and sing along and that are well arranged by professionals (Michael Erdmann). He rides his 10-year old Swedish warmblood gelding Touchdown (by Quaterback x Sack) to Billy Idol classics such as "Hot in the City". The young Grand Prix horse showed lovely trot half passes and trot extensions, a very good extended walk, and executed big two tempi changes. The horses sometimes tilted the head to the left and in passage he could be more engaged from behind. Unfortunately the piaffes were not at their best in the freestyle, often too forward or unbalanced.  Touchdown, who has stepped into the shoes of Patrik's previous number one, the Swiss bred and owned Well Done de la Roche (injured since the Tokyo Olympics) scored 82.955% on his Aachen debut and finished fourth. Kittel's best man at his wedding, Finnish Henri Ruoste, completed the top five aboard his own and Jochen Arl's 12-year old Belgian warmblood horse Kontestro DB (by Contendro x Cassini II). The pair has very current freestyle music, riding to the soundtrack of Top Gun. It fits his highly expressive bay gelding very well, especially in the passage work in which the horse shows incredibly elevation and is now achieving a more relaxed composure. There could have been more bending in the corners, but the trot extensions had plenty of overtrack and the half passes were ground covering. The piaffes were on the spot. In the extended walk the horse should have more overtrack, and the collected was short. Ruoste impressed with a stellar line of tempi changes, going from two's directly into ones and performing over thirty changes without mistake. The pirouettes were calm, collected, showing great sit from behind and good lift in front. Only at the end of the test a small bobble arose in the canter - piaffe transition in which the horse dropped to a halt.  They scored 82.735% for a fifth place, but there could have been more in the tank as the judges had hum between second and seventh place. The technical marks ranged from 74.750% up to 79.250%.

Benjamin Werndl and the 13-year old Oldenburg gelding Famoso (by Farewell III x Welt Hit II) were an image of correctness and harmony in their African tuned freestyle. Flora Keller's bay gelding, who is bought in the stable of Henri Ruoste/Jochen Arl, showcased really lovely piaffe-passage with good sit from behind and nicely balanced. He did once lose the rhythm in the piaffe pirouette and in the collected walk he became lateral. A few minor blotches in the canter work  (big pirouettes, some changes a bit shorter behind) brought the score down to 82.730% for a sixth place.

Eurodressage photographed all riders competing at the 2022 CDIO Aachen. If you are interested in our photos for social media or prints, email us.