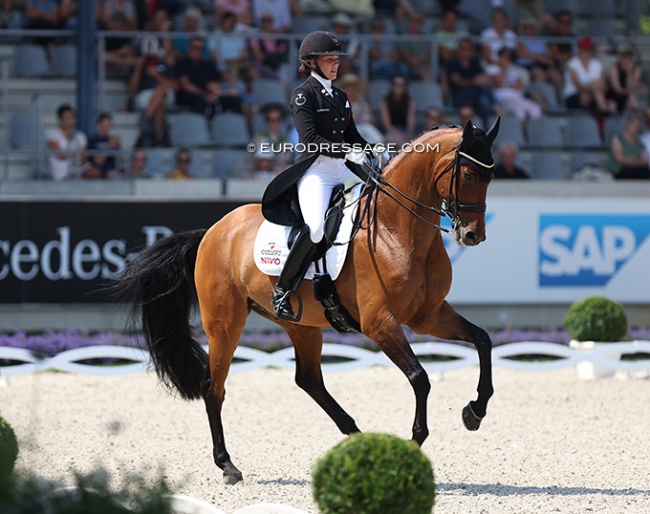 The 2022 FEI Nations Cup at Aachen (GER) was full of emotion as Denmark recorded its first victory in the history of the event on Saturday 2 July 2022.

The FEI Nations' Cup format has brought much confusion to spectators at every single CDIO show seems to employs their own system to calculate points and determine the winning country. At the kick-off leg in Wellington mixed teams of small and big tour combinations can ride, at the second leg in Compiegne, for instance, the points of the riders are counted in three classes (GP, GPS, and Kur). However, at the CDIO Aachen points for the Grand Prix and Special are totalled.

The FEI nations' cup is like a box of chocolates, you never know what you are going to get!

Denmark finished on a winning total of 459.421 points after tallying the three best scores from the Grand Prix and Grand Prix Special.

Germany was left on 454.903 points after team anchor and seven-time Olympic gold medalist Isabell Werth (DSP Quantaz) was shockingly eliminated in the Special when blood was found on her horse's mouth.This contrasts heavily with the Nations' Cup leg in Compiegne, for instance, where an elimination of a rider also entails the elimination of the country in the ranking.

"It's just really fun building this [team] together. It was an annoying way to win in the end with Isabell, but I still think that we did a super job today. Everyone contributed," said Cathrine Dufour who spearheaded the Danish team.

The runners-up from April's 2022 World Cup™ Final, Dufour and Vamos Amigos anchored the group with career-best scores in both the Grand Prix (81.544) and Grand Prix Special (80.064). The pair was the only combination to score above 80 percent.

"I'm super proud of [Vamos Amigos]. He did a super job again in the ring today [in the Grand Prix Special]," Dufour said. "I might have had five minutes too much warm-up, so I had little less power compared to the Grand Prix, when he was super, super electric. He's 10 years old and is doing super job."

Bachmann was not expecting to be at Aachen after Marshall-Bell was sold to U25 rider Nicole Ahorner of Austria earlier this year, but a meaningful summer reunion has transpired in hopes that horse and rider can make Denmark's team for the upcoming FEI World Championships in Herning (DEN). After finishing 11th in the Grand Prix (73.696%), the pair rose in the standings with a Grand Prix Special test worthy of 75.234%.

"This was our last selection [event] for our team for [the World Championships]. I was very happy. It was a big day for me," Bachmann said. "I rode [Marshall-Bell] eight times before coming here. It was a little stressful but still a good experience."

"We are proud—overwhelmed I would say I am," Binder said. "I'm really grateful to have such good riders and lovely horses and horse owners that support us all the way."

With its podium finish, Sweden extended its lead in the FEI Dressage Nations Cup™ series with 41 points. The Netherlands moved into second with 24 points, while Spain sits third (20 points). The series concludes at Falsterbo (SWE), 14-17 July.

Text and Photos © Astrid Appels (FEI press release edited by Eurodressage)  - NO REPRODUCTION ALLOWED
Eurodressage photographed all riders competing at the 2022 CDIO Aachen. If you are interested in our photos for social media or prints, email us.