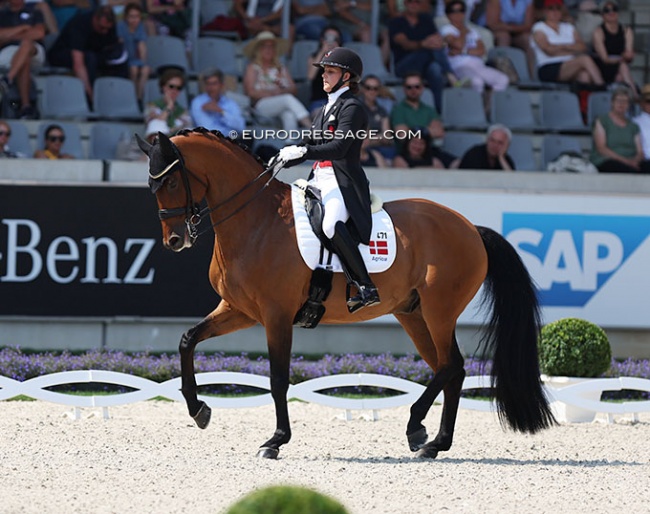 The battle in the Lambertz Nations Cup has rarely been as exciting as this year at the 2022 CDIO Aachen on Thursday 30 July 2022. Part 1 was on the agenda today, the Grand Prix de Dressage, the Prize of Family Tesch. Two riders impressed with outstanding performances, first and foremost Cathrine Dufour.

“I love hot horses!”, which is exactly why the Danish rider Cathrine Dufour wanted to try out her meanwhile ten-year-old Vitalis son, Vamos Amigos, when he came to her stables as a six-year-old. There was a very fine line between genius and madness back then Dufour had reported. And she turned him into one of the best Grand Prix horses in the world.

Today, at the very latest, after he won the Prize of Family Tesch on a score of 81.544 percent. Horses that achieve over 80 percent in Grand Prix tests are potential individual medal candidates. Not only the test was impressive, but also how relaxed the Westphalian-bred gelding remained when the crowd applauded thunderously. He simply looked around then strode out of the ring at a leisurely pace. Especially against the backdrop of his former history.

Cathrine Dufour: “I think it was a statement from him today: I am not a baby anymore!”

The two runners-up were as equally overjoyed as the winner. Second place went to Frederic Wandres and Duke of Britain, who were also the best German pair today on a score of 77.217 percent. The best result in his career hitherto.  The horse and rider team from Hof Kasselmann, only ever beat this score by a few points once before, namely in April at his ‘home game’, the Horses & Dreams in Hagen.

“I am so happy that I came second with Duke of Britain and that I was the best German rider today. But above all I am so happy for Duke, because he has been so consistent for a long time, without any ups and downs. He simply kept on improving. I think he has made a real jump forward, has developed his strengths and we don’t normally make any mistakes – which is very important in a field of competitors like this.”

Wandres explained that he actually doesn’t come from a family of riders. He didn’t ride Pony, Junior or Young Rider tours, because he didn’t have the possibilities to do so at home. Instead he rode dressage with jumping horses. That only changed after he began his apprenticeship as a professional rider at Hof Kasselmann, where he got to know Duke of Britain who was schooled to Prix St. Georges level at the time – and now they have finished second in Aachen.

The Finnish rider, Henri Ruoste, caused a stir by coming third with his twelve-year-old Contendro son, Kontestro DB, after scoring 76.783 percent. A huge achievement for the 40-year-old, who lives in Menden.

“I think I am as surprised as everyone else. But my horse has a huge heart and always tries his best. Sometimes even too much, which can occasionally articulate itself in tension. But I hope this will improve step by step. But I am so proud of him and it is an honour to be sitting here. Being able to ride here is an absolute honour. And then to come under the top three, that is really special.”

His career got off to a slightly different start as that of Wandres: “My parents bought me my first pony before I could say I want to play ice hockey. And I got stuck there, but I am very happy I did. Riding is a passion for us, we do it for the love of the horse and for the love of the sport.”

In the Lambertz Nations Cup, the suspension will rise in Grand Prix Special!

Denmark is currently in the lead on an interim score of 229.740 points, ahead of Germany with 228.499 points and the Netherlands on 219.608 points. So, everything is still open, particularly between the first two teams. If the Danish team were to win, it would be the first time they take the victory in the Lambertz Nations Cup at the CHIO Aachen.

Text and Photos © Astrid Appels  - NO REPRODUCTION ALLOWED
Eurodressage photographed all riders competing at the 2022 CDIO Aachen. If you are interested in our photos for social media or prints, email us.