Dufour and Bohemian Set the Tone for the Summer, Wins 4* Grand Prix at 2022 CDIO Aachen 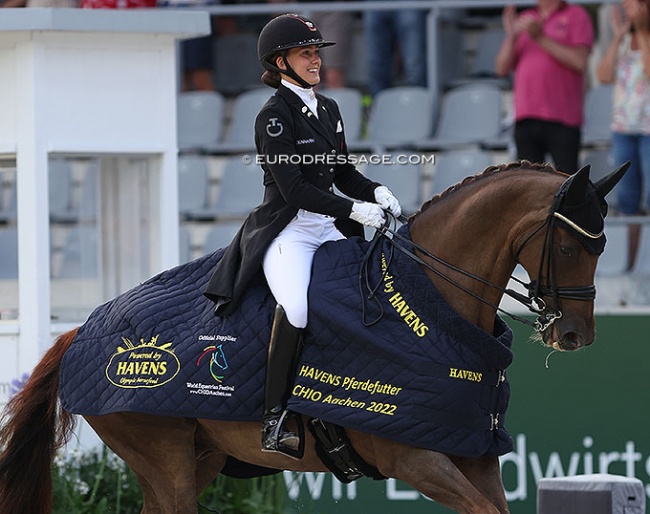 Danish Cathrine Dufour set the tone for the start of the summer by winning the 4* Grand Prix at the 2022 CDIO Aachen on Wednesday 29 June 2022, the first day of competition at the "World Equestrian Festival".

After a cancellation in 2020 due to corona and a slimmed down version in 2021, the CHIO Aachen is back to its usual form with sell-out crowds for the opening ceremony on Tuesday and a packed showgrounds today, even though the dressage stadium was only half full (nothing unusual for a mid-week work day.)

Aachen is buzzing with excitement and everybody keeps repeating it: "there is no show in the world like Aachen." Each time you arrive on the grounds, you realize how unique this event is. Over the speakers you hear the announcer self-confidently state: "Aachen, the best and biggest sport even in Germany," and I believe that is true.

Another buzz one felt in Aachen today is how important this event is for team selection for the summer's World Championships Dressage in Herning. It's the talk of the town who will make the cut - especially for Germany and Denmark - and Aachen serves as dress rehearsal. A few hours before the 4* Grand Prix class, Germany's Olympian Dorothee Schneider pulled out her top ride, which leaves the current World Champion country in a severely weakened position, while Denmark is going full blast this year for home glory.

After placing fourth at the Tokyo Olympics and winning silver at the European Championships in Hagen last September, Dufour is eyeing gold this time and her top ticket is Bohemian, the Zingerlsen family's 12-year old Westfalian by Bordeaux x Samarant.

Dufour rides Bohemian in the 4* tour and her second, younger ride Vamos Amigos (by Vitalis x Hotline)in the 5* tour as the 10-year old competed at the Danish Championships several weeks ago and, therefore, gets preference from the Danish selectors for the FEI Nations Cup CDIO leg in Aachen.

All eyes are on Bohemian though as the sensitive liver chestnut showed in Aachen today that he has come of age. There was much more inner peace and relaxation to be noticed, he showed improved bending in the corners and the piaffe-passage were well ridden. The passage is soft-footed, the piaffe on the spot, although he still drops a bit too much in the poll at times and sometimes skips the right hindleg out from under the body. The extended walk was good, there was a slight sway to the right in the hindquarters in the two tempi changes, but the pirouettes were fabulous and had the "Kyra Kyrklund stamp" all over. The "weak" point of today were all three extended trot lines, which lacked ground cover and spring, and were ridden too conservatively. They still scored 7.2 from the judges. Overall Dufour's ride was a total pleasure to watch: calm, soft, and with invisible aids. At the end of the ride, Bohemian stood dead quiet as the crowd erupted in a roar.

Second place went to the American duo Adrienne Lyle and Betsy Juliano's 15-year old Hanoverian stallion Salvino (by Sandro Hit x Donnerhall), who had flown in from the States for their European summer.

The pair produced maybe not their most polished test, but there was plenty to like in this ride. The black stallion, who was not his fittest at the Tokyo Olympics,  looked in decent shape in Aachen. The half pass right was maybe not the most elastic and in the corners he still got a bit iffy, but the trot extensions covered ground although there could be more parallelly between the front and hindleg. Salvino's passage is very expressive and off the ground, but appeared hasty at times. His piaffe is very good, with super sit and lift in front, though the rhythm could be more clockwork. Salvino showed a good extended and collected walk, a well ridden zig zag, and one tempi changes. The extended canter was on the forehand (7.3), but they finished with a nice final centerline. At times the contact was a bit unsteady, but Lyle always stayed calm and never pulled her horse tight. It was an interesting test to watch.

The tall dark bay gelding was bought by Russian couple Elena and Sergey Knyaginicheva at the 2013 PSI Auction for 1 million euro and has had a string of riders in his career so far: Eva Möller, Steffen Frahm, Insa Hansen, Ingrid Klimke, Anna Pyrkina, for sale at Helgstrand Dressage, and then back to Germany to be matched to Frederic Wandres. On 2 March the FEI banned all Russian athletes and Russian owned horses from competition because of the War in Ukraine, but five days later on 7 March 2022 - simsalabim - the ownership of Bluetooth was changed in the FEI database from his Russian owners to Wandres' employer and PSI auction organizer Hof Kasselmann and the horse was unblocked for competition.

Wandres and Bluetooth made their Aachen debut as a pair and landed third place in the 4* Grand Prix. Frederic showed his skills as a rider and piloted the inexperienced Grand Prix horse through the test, helping him with the self-carriage in the passage. The first piaffe was still a bit laboured and wide behind, but in the second Bluetooth showed off his talent and potential for the movement. The extended walk was good, the collected would have been clearer in the 4-beat rhythm. The two tempi changes and zig zag were well executed, the canter work looked solid overall with small pirouettes (yet a double beat in the right one). Overall it was a clean and promising test, which earned them 75.217%. The judges were in unison (marks between 74.348 and 75.978).

Norwegian Isabel Freese and the 11-year old Oldenburg stallion Total Hope (by Totilas x Don Schufro) finally made their A-league international Grand Prix debut. Owned by Lone Boegh Henriksen and Paul Schockemöhle, the black stallion is an embryotransfer out of Isabell Werth's celebrated mare Weihegold. The 10-year old did his first season at international Grand Prix level this year and showed at two smaller CDI's in Mannheim and the Aachen Dressage Days in May, before heading to the big whopper: CHIO Aachen.

The pair was a total pleasure! Total Hope takes so much after his sire Totilas: black, white socks, compact. This Oldenburg stallion does come across a bit more "ponesque" with its short neck, but he's brimming with talent and seems to give his rider an easy ride. The pair showed good trot extensions, the left trot half pass was the better one as the right one appeared hurried. Total Hope bounces off the ground in passage and can really sit in piaffe, staying on the spot. The first one was a bit hesitant in the rhythm, the second one better although the horse could still come up more in front. The second passage was sometimes a bit uneven. The walk was well executed, the extended canter super nice, the zig zag good, the one tempi's were lovely despite a mistake and the pirouettes were great. Total Hope is a lovely horse and one to watch in Herning!

The most talked about horse this year is without a doubt Andreas Helgstrand and Cathrine Rasmussen's KWPN stallion Jovian (by Apache x Tango). After winning the 7-year old World Championships as a developing Prix St Georges horses in Verden at the end of August, there was not a moment respite for the talented stallion. He was launched straight into the Grand Prix tour, without even having turned 8, and the target of Herning this summer is set in stone.

His first two international starts in Aalborg and at the Aachen Dressage Days in June were highly controversial as the stunning stallion with his unlimited scope and ground cover in trot and canter razzle-dazzled the judges, blinding them for the major flaws there were in the collected work and the lack relaxation and self carriage in this powerhouse stallion. Inflated scores flashed on the board and triggered huge discussions on social media about what is being judged in this horse: name, quality, promise, training?

After a nine-year absence from the CDIO Aachen, Helgstrand returned to the "holy show grounds" this year to secure his Danish team ticket for Herning. He is facing strong opposition though from two other team candidates, Olympian Nanna Skodborg Merrald on her 2021 European Championship ride Atterupgaards Orthilia, and from 2021 EC team rider Daniel Bachmann Andersen, whose horse Marshall Bell got conveniently sold by Helgstrand and, thereby removed from team contention. However - sacre blue - buyer Nicola Ahorner stunned everyone by giving the horse to Daniel for the summer.

And this is how the stage was set before Helgstrand and Jovian to ride down the centerline in Aachen as first pair to go in the 4* Grand Prix today at 16.h30 in the afternoon. The pair probably rode their best Grand Prix test so far, and this time were a bit more realistically scored although judge Gribbons probably hit the marker best. The stallion produced strong trot extension and even, ground covering half passes that were not overpushed. The rein back was diagonal but the halt not square. The passage had much airtime and ground cover, though could be more closed from behind. The piaffes were still very difficult with the horse heavily leaning on the forehand, grinding its teeth, and pulling his hocks up instead of shifting them under the body, but this time he did not roll himself up into  a ball. The The extended walk was poor with barely any overtrack, yet was still rewarded with 7.1. The collected walk was good. The two tempi's were big, but the horse swings the hindquarters in the changes to the right. This was also obvious in the zig zag. The extended canter was outstanding, the ones correct but laboured. The pirouettes were small. After the final extended trot, the horse flew through the corner. The piaffe at X was better on the spot, but viewed from behind one can clearly see how he crosses the hindlegs, an indication of lack of balance and carriage at this stage in the young horse's career.

Text and Photos © Astrid Appels  - NO REPRODUCTION ALLOWED
Eurodressage photographed all riders competing at the 2022 CDIO Aachen. If you are interested in our photos for social media or prints, email us.