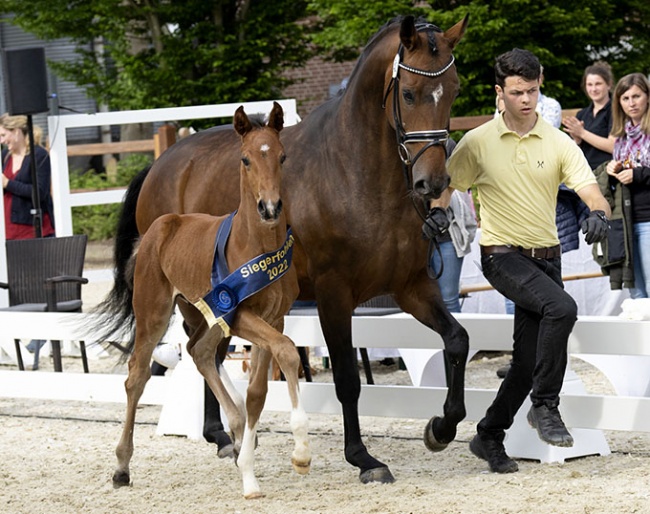 Equipped with the right name of a well-known champagne brand, Veuve Clicquot was the top priced foal selling for 33,500 euro.

Ten bidders were interested in the strong moving Valdiviani x Sir Donnerhall colt Veuve Clicquot (breeder and exhibitor: Hans-Dieter Erfkemper, Borken). At the hammer price of 33,500 Euros, he was sold to regular Hannoveraner customers from Spain after almost 30 minutes of online bidding.

It was not the first time that the breeder had reason to celebrate. A few weeks ago, Veuve Clicquot was the winning foal at the foal show in Hünxe.

Veuve Clicquot did not have to make the journey alone. The second most expensive foal, Franco's Hitparade (by Franco Nero x Sandro Hit (breeder and exhibitor: Stefan Herrmann, Northeim), also went to Andalusia for 24,000 euro.

Spaniards also bought the third and fourth most expensive foal of the auction: Bonna Royal (by Bonjour x Christ) for 20,500 euro and Dakota (by Don Nobless x Statesman) for 18,000 euro.

The best paid foal with jumping genetics has an even longer journey ahead of him. Buyers from the USA purchased the Conthargos x Chacco-Blue daughter Candora (breeder and exhibitor: Marion Menck, Rübehorst). The bay filly out of the dam line of Naturkind cost 13,500 euro. It is the 32nd foal of the breeder that found a new owner at a Verden auction.

So Secret (by Secret x Finest) sold for 16,500 euro to Norway. A Belgian buyer bought Famos (by Franklin x Furst Belissaro) for 9,250 euro.

Juna (by Jovian x Quaterback) will stay in Germany for 15,000 euro, and so will Freigold (by Freigeist x Danone II) and Total Energy (by Total McLaren x Benicio) for 12,000 euro.

The Verden Foal Spring closed with a very satisfying finale. Twelve foals achieved prices in the five-digit range. 18 of the 32 foals are expected to leave Germany. By far the largest contingent (seven foals) was auctioned to Spain.