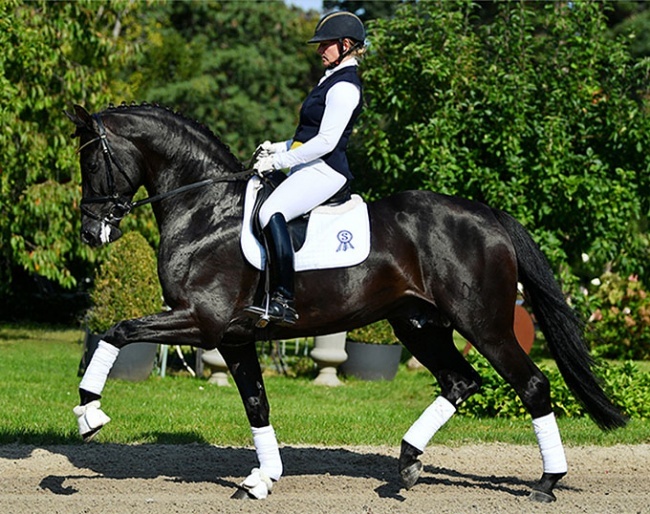 German Olympian Dorothee Schneider has taken over the ride on the 6-year old Hanoverian gelding Virazzo.

Virazzo is by Vivaldi out of Renaissance (by Ragazzo x Fidelio x Pastrnak). He is bred by Marlo-Christin Kockerols.

Virazzo was discovered by Hof Kasselmann as a youngster and is the half brother to Ashley Holzer's international Grand Prix horse Valentine (by Sir Donnerhall).

In 2020 he was part of the PSI Auction collection, as a stallion, and sold to Andreas Helgstrand. The listed auction price was 482,000 euro.

Kanitzky is the breeder of Sir Donnerhall I and II and runs a dressage stable with riders Sarah Backhaus, David Kunath, and Tessa Frank on board.

Under Helgstrand Germany team rider Jana Schrodter, Virazzo competed at the 2021 Bundeschampionate where he was fifth in the first round and 17th in the 5-year old finals.

In 2022 Virazzo, who is also known in Germany under the name "Vigazzo", moved to Dorothee Schneider's Gestut St. Stephan in Framersheim, Germany.

The ride was allocated to assistant Hannah Milena Rother, who competed him at regional shows in Zweibrucken, Rheinzabern, and Kurtscheid.

Last weekend Dorothee Schneider took over the ride and presented him at the regional show in Ladenburg, where they won the Bundeschampionate qualifier with 8,30 points.