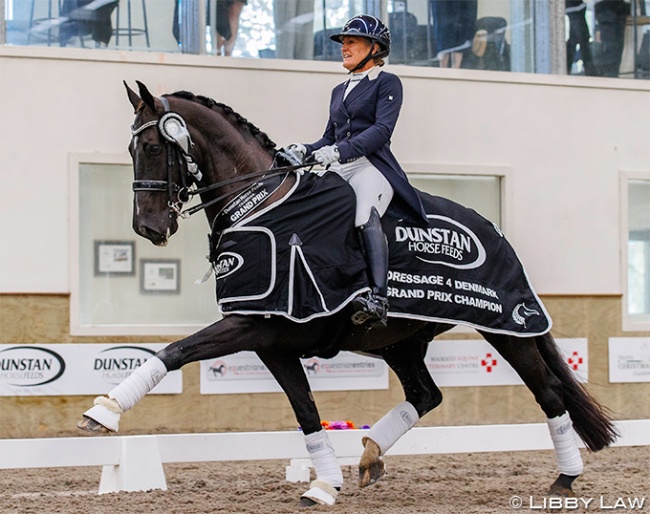 After the earlier announcement of the selection of Melissa Galloway and John Thompson, the New Zealand equestrian federation proudly announced that a third rider, Gaylene Lennard, will be able to travel to Europe and represent her country and make a team at the 2022 World Championships Dressage in Herning.

The Logistics of Leaving Everything Behind

Gaylene Lennard figured the opportunity to represent New Zealand at the fast-approaching World Championships in Denmark was a once-in-a-lifetime chance she couldn’t pass on.

Initially, the lifetime rider from Te Aroha had made herself unavailable for selection despite ticking all the boxes, but she’s stepped back into the frame and New Zealand will now have its first team at World Champs since 1998. Perhaps more exciting is that when she, John Thompson and Melissa Galloway compete in Denmark, they also have a very good chance of qualifying a team for the 2024 Paris Olympic Games.

“It was all about mum,” said Gaylene. “If I was to go away (to Champs), I had to make sure she was well looked after. Finding care was harder than I thought it would be.”

Her mother Betty, who broke her hip the day Gaylene flew to Australia to compete in April, was pushing her to be part of the New Zealand team for the Champs. “She supports our horses 100% but if something happened to her I would never forgive myself. She has done so much for us over the years, and now it is my turn to return that.”

But things have slipped into place and now, Gaylene has less than three weeks to get organised for that chance of a lifetime.

“It is exciting but I am also a little worried. It is a long way for the horse to travel.”

Jax Johnson (by Johnson) will travel first to Melbourne where he will meet John Thompson’s stallion Chemistry (by Connaisseur), and they will then fly to Germany. The team will be joined by Netherlands-based Melissa Galloway and Windermere J’Obei W (by Johnson) at the Championships in Denmark.

An incredible feat that needs mentioning is that two of the three New Zealand team horses are bred by David Woolley.

Gaylene is hoping she can fly with the horse, but in the meantime there is much to do. Since their very successful trip to Australia where they broke records and announced themselves to the world stage, she has been having online lessons with her coach Vanessa Way.

“We’ve been particularly working on the Grand Prix because that is the class it is all about.”  This week she will don her competition gear and ride down the centre line before a judge. “The last time we did that was in Australia in April and you get rusty,” said the 59-year-old. “I think things are going really well though. He has certainly stepped up since we went to Australia.”

ESNZ high performance general manager Jock Paget says for New Zealand to have a team headed to the World Champs means a huge amount to ESNZ and the sport. “It is a reflection of these individuals who have worked really hard to get to where they are,” said Jock.

“There is still a lot of work to do, but if at the World Champs, New Zealand finishes as the highest-ranked country in Olympic Group G – comprising South East Asia and Oceania – we would qualify a team for the Paris Games. “It is a one-shot deal and a chance to make history. There are never any guarantees in sport but this is an achievable goal for these combinations.”

He felt the dressage discipline had made a huge effort to enable this by holding the Dressage for Denmark Show as a qualification opportunity, as well as raising funds towards the campaign.

“We are still short on funding and need to raise approximately $100,00 to cover it,” said Jock. “Whilst it is a lot of money, it is for a great cause and brings a real opportunity to lift the sport of dressage in New Zealand. We are hopeful this can be achieved.”

The only other time New Zealand has fielded a dressage team at a World Championships was in Rome in 1998 when Cindy Kent aboard Playskool, Catherine Smallbone on Alzac, and Kallista Field with Janeiro placed 18th. There have been two individuals who have previously competed at World Champs for New Zealand – Kallista Field and Jamahl, who placed 56th individually at Jerez in 2002, and Julie Brougham aboard Vom Feinsten, who was 36th  at Tryon in 2018.

New Zealand has never been represented by a dressage team at an Olympic Games yet, but four times had individuals compete.

ESNZ chief executive Julian Bowden said to have that opportunity was hugely exciting. “This team has a real chance of doing something special and showing our young and up-and-coming dressage riders that anything is possible,” he said. “We look forward to this being another step in having our dressage riders on the world stage. The personal investment by this group is huge and we are doing all we can to minimise that cost.”
Dressage New Zealand chair Scott McKenna reiterates Julian’s words. “Fielding a team at the Champs is a goal we have had in our sights for several years,” said Scott. “Despite major challenges of late, it is fantastic to be able to achieve that goal which is an important stepping stone to our greater goal of fielding a team at the Paris Olympic Games.”

He said credit must go to the other New Zealand grand prix riders who have not made the team, but continued to push the bar higher, alongside the trainers and breeders of the combinations who had been named.

ESNZ and the riders would continue raising funds for the World Champs, which are being hosted in Herning, Denmark, from August 6-15.