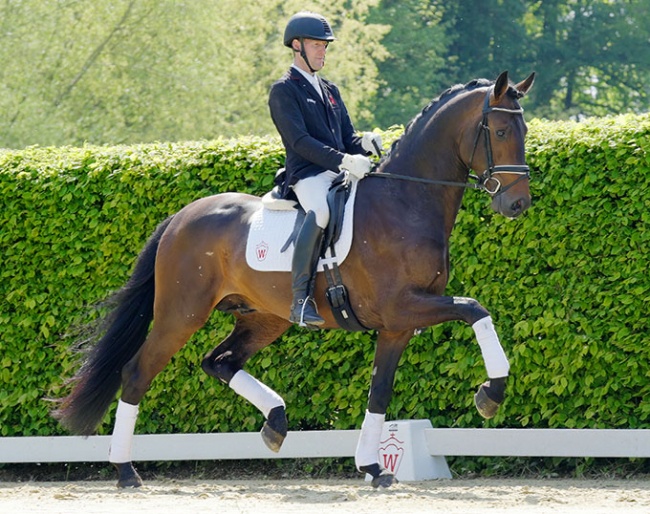 Sport horse Esdras and foal Bondadoso became the top sellers of the Westfalian Online Auction of which the bidding concluded on 12 and 13 June 2022.

The auction was spread over two days with the sport horses selling first. 42 dressage and show jumping horses were on offer and 36 of them were sold to a new owner.

Esdraw (by Escamillo x Diamond Hit) was the best selling sport horse, finding a new owner for 120,000 euro. He is bred by Kai Haarlammert and was presented at auction by the breeder in partnership with stallion owner Tobias Schult.

The best selling jumper was Cooper (by Comme il faut x Cassini I), who sold for 35,500 euro.

Due to the renovation work at the Westphalian Horse Centre, the dressage horses were stabled at the Haus-Giesking stud in Nottuln-Appelhülsen.

"Thanks to the great hospitality of the Tecklenborg family, it was possible for us to hold our summer auction without any complications. Our whole dressage team felt very comfortable at Gestüt Haus-Giesking! A big thank you goes to the Tecklenborg family," said auction manager Thomas Münch. The customers also felt comfortable at the stud. The training of the dressage horses was well attended during the ten-day auction period.

The colt Bondadoso (by  Bonds x Fidertanz) was the best seller of the foal lot, which included 32 foals of which 73% sold. Bred by Elisa Mora and Michael Menke, Bondadoso sold for 21,000 euro.

Don Diego (by Dancier Gold x Sir Donnerhall), bred by Ludger Wigger-Pieper, was the second most expensive foal, selling for 14,500 euro to Denmark.

All other foals stayed under the 10,000 euro bracket with dressage bred foals Billy Be (by Beck's x Riccio) going for 8,750 euro and San Francisco (by Sir Heinrich x Zoom) for 8,000 euro.