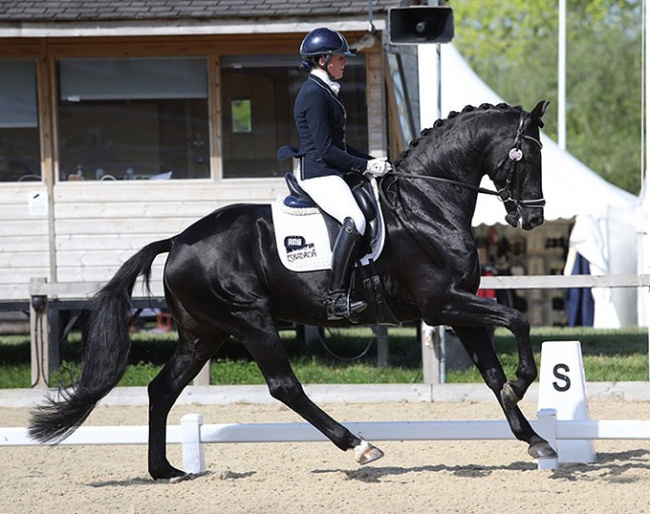 Rising 6-year old licensed stallion Blue Hors Zackorado moved to the UK in April as part of a new collaboration between Blue Hors Stud and Elite Stallions, and has lost no time in making his mark on both the British competition and breeding scene.

He quickly settled at Anna Ross’ Elite Dressage base in Devon with head rider Beth Bainbridge taking the reins.  The pair burst onto the GB competition circuit last week at Hickstead Premier League winning the International Six Year Old Championship class with a whopping 96.6%.  The class is also a qualifier for the National Young Horse Championships.  The impressive combination scored 9.5 for their trot, 10 for canter, 9.5 for walk and 10 for perspective, producing a fluid test full of natural swing, cadence and power.

“He completely rose to the occasion,” said Beth, “he was not spooky or fazed by the atmosphere.

This impressive young licensed Oldenburg stallion is by Blue Hors Zack out of Roxanna (by Florencio x Donnerhall x Rubinstein) and offers a pedigree that combines the best of Dutch and German dressage breeding through iconic sires like Ferro and Jazz on his paternal side, and Florestan, Weltmeyer and Donnerhall on the maternal side.

Before coming to the UK, Zackorado was awarded the title of Champion at his licensing in Kreuth, Germany in 2018 and won the crowd and judges over with his exceptional performance.

According to rider Beth, ‘Zacko’ is a fast learner who loves his job and “just when you think you’ve found his top gear, you can go on again and find another gear, he’s just so exciting to ride!”

Whilst Zacko is an athletic and graceful horse to watch, his biggest asset by far seems to be his exceptional temperament.  Under saddle he is super trainable, fast to learn and eager to please.  Whilst on the ground, “you wouldn’t know you had a stallion in the barn” explained Anna Ross, “He is stabled with mares and geldings and is a complete pleasure to have around.”

In fact, shortly after Hickstead Premier League, his stable mate and rising Grand Prix star Habouche was confirmed pregnant to Zackorado, who had also successfully competed at the event.  The striking grey mare lives opposite Zacko and the embryo has now been transferred to a surrogate at Newton Stud.

This world class stallion has a bright future ahead in both sports and breeding, and is already proving to be in high demand in the UK where he is available via chilled semen exclusively from Elite Stallions.