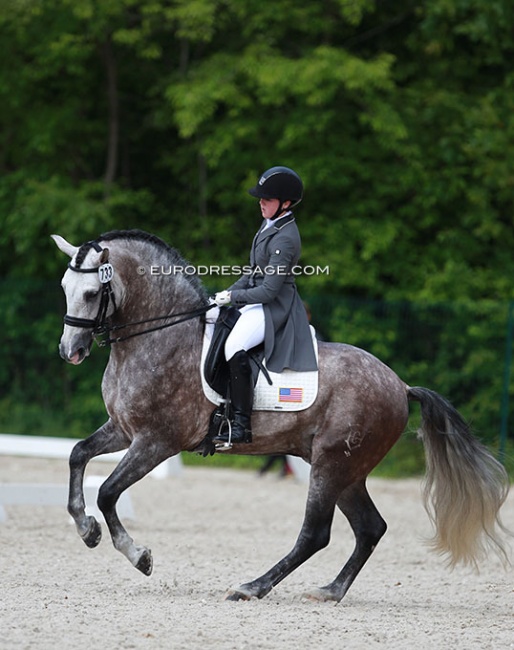 American Under 25 Kerrigan Gluch's Under 25 mount Vaquero HGF has been retired from competition sport.

Vaquero HGF is an American bred PRE stallion by Cuatrero EU out of Encina HGF (by Idilio II). He is bred by Kimberly van Kampen at Hampton Green farm in Fruitport, Michigan.

Born in the U.S.A., First Competed in Spain

Originally selected by Courtney King-Dye as a future prospect, owner Kimberly Van Kampen was forced to make other plans for Vaquero following Courtney’s untimely departure from the sport.

At 3 years old, Vaquero was sent to Jose Daniel Martin Dockx in Spain for his early training, and to see how this American product would do in competition against the best young horses in that country.

He made his national debut as a four year old, finishing in the top 10 at the National Young Horse Championships and among the top five of PRE breed. He also competed in his first international classes at the 2012 CDI Vejer de la Frontera. At the Spanish Young Horse Championships, he finished 10th nationally and was the highest ranked PRE in the country.

In 2013, he campaigned at the six year old levels and finished 7th at the 2013 Spanish Young Horse Championships.

He won a bronze medal at 2014 SICAB, which is particularly notable as he became the first PRE horse bred in United States to win a medal in the prestigious PRE World Championships.

Vaquero HGF returned to the U.S.A. in 2015 and was matched with young rider Kerrigan Gluch.

Trained by Oded Shimoni, the new combination made its international Young Rider debut in Wellington in February 2015. They competed at the North American Young Riders Championships and placed fifth with the team, fifth in the individual test and got bronze in the Kur to Music finals. They were the 2015 U.S. reserve young rider champions.

In 2016 the duo was selected for the U.S. Young rider tour in Europe and competed at the CDI's in Compiegne and Hagen.

A four year break from international showing followed, although they made their national U25 debut in 2018 with the help of Robert Dover. They returned to the CDI ring in 2020 at Under 25 level and competed at that level through 2021. They were the reserve champions at the 2020 U.S. Under 25 Championships (Brentina Cup).

"Following his success at U25, Vaquero never showed the same enthusiasm for the Big Tour. After several national starts, rider and owner decided that the horse had given enough and deserved to have a say in his own future," van Kampen stated.

"At 16 years old, Vaquero has nothing more to prove," she continued. "On March 13, Kerrigan and Vaquero took their final salute together at X. Still 100% sound and able to enjoy pleasure rides with his special girl, Vaquero will be rewarded with a peaceful retirement at the farm of his birth."