Thomas Baur: "Does the FEI Dressage Committee Sit in an Ivory Tower?" 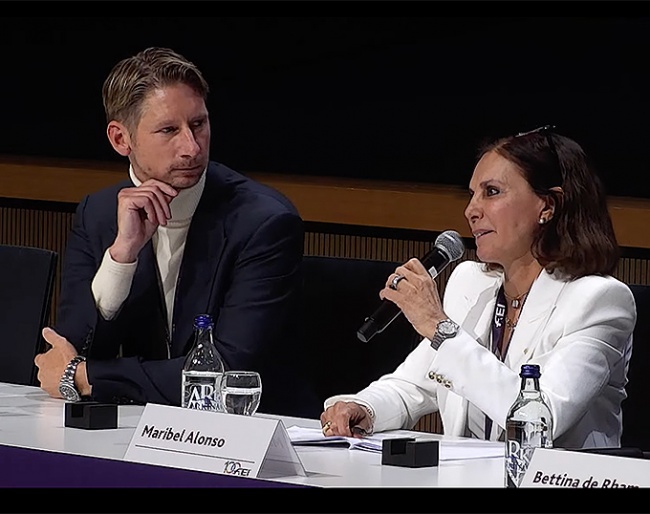 Guest columnist of this week is German Thomas Baur, show director of the Global Dressage Festival in Wellington as well as at numerous CDI's in the U.S.A. and Europe. He is the former vice chair of the International (Equestrian) Event Organizers Association (IEOA) and was a member of the FEI Dressage Committee as the show organizer's representative.

"Does the FEI Dressage Committee Sit in an Ivory Tower?"

As I did not attend the 2022 FEI Sports Forum, the proposal for more "progressive structures" for events was brought to my attention and I was horrified to see the suggestions for the "improvement" of dressage show organisation.  In my resignation letter as EO vice chair last year, I already pointed out the ivory tower position of the FEI Dressage Committee, which I believe has only worsened since the election of the new chairman at the 2021 FEI General assembly

I'm not sure if the Dressage Organizers Club, or the International Dressage Riders Club have been consulted prior to the presentation of these progressive structures to the world at the FEI Sports forum? (Rewatch the forum, as of 1h37)

One thing is very clear: there is no longer a real show organiser's representative in the FE Dressage Committee, who deeply understands the needs of the Organising Committees (OC). If these "progressive structures," proposed at the 2022 FEI Sports Forum, come into effect, I believe many OCs -  especially those outside of Western Europe - will decide to no longr organize international dressage competitions in the future.

Is World Cup Participation Even Possible?

The most striking proposition that has been made are new "Minimum Entry Requirements (MER)."

The FEI is proposing that a horse/rider combination needs to have achieved a certain score in a CDI 3* to enter a higher level of CDI competition, meaning a 4 or 5* or CDI-W World Cup qualifier.

It makes sense to raise the bar for a CDI 5* and make that competition format more prestigious, one of the very few positive things that has been proposed.

One needs to keep in mind that the average Grand Prix score achieved worldwide is 65.9 %. To qualify for a CDI 4* the FEI proposes riders to have a achieved a minimum entry requirement of having achieved two GP scores of 64.00 % and for a CDI 5* or a CDI-W the proposal is 65.00%. I believe this will dramatically reduce the number of entries outside Western Europe.

This will certainly impact the World Cup qualification system! It seems to be forgotten that globally only a very limited number of 4* or 5* competitions are organized; in North America only in Wellington, in Central Europe only in Pilisjaszfalu and Szilvasvarad, and there are not a single 4 or 5* CDI in Oceania! A large group of riders world wide will be automatically excluded from World Cup participation because they are not be able to qualify for CDI-Ws as CDI4* and CDI5* competitions do not exist in their continent or region.

Qualification for Special or Freestyle

The FEI also mandates a certain score to qualify for the next class in a show. This concept exists at Grand Prix level and works quite well.

The current rule is that a combination must achieve 60 % in the GP in order to qualify for a Grand Prix Special (GPS) or Freestyle (GPFS). With the rising level in dressage sport is obvious that this needs to be raised.

However, we need to approach this from a global perspective, and not just the elite mainly located in Western Europe. We need to look at the worldwide average is in a Grand Prix (GP) or Short Grand Prix (SGP) compared to the newly proposed qualification within a show, because I believe that based on the new proposal many riders will not be able to move forward to GPS/GPFS and will end up paying an expensive entry fee for a CDI and just ride one test.

By raising the bar in the Grand Prix to qualify for the next round, it will impact the amount of riders competing in CDIs and CDI-Ws.

Worldwide average in a GP class at the respective categories of CDI ---  FEI proposed score to move forward:

As you can see with a minimum score to enter a CDI5* (achieve a 64% at a 4*), a combination then competing in a 5* CDI will likely qualify to move forward to the next class at the show, which would be good, but for the CDI-W I believe the effect will be that less riders will qualify.

Why Pay for a CDI-W with Empty Classes?

Let's have a closer look at CDI-Ws.

Over 40% of the riders competing in a GP or SGP in all Leagues will not move forward to the Freestyle. In the North American League, the percentage of riders not achieving the minimum score for the next round is closer to 50%, and in the Pacific League this is over 60% or riders failing to meet the minimum score. For the Central European League I believe it is somewhere in between.

Why would an Organizing Committe in these parts of the world even think about running a CDI-W and pay a licensing fee to the FEI?

In my opinion there is little incentive for riders, except the established elite, to go to international shows, and for sure no incentive for show hosts to organize shows with this proposal.

At the moment the organizers of CDIs outside the Western European powerhouses are still trying to grow their shows. Not only in the Americas but also in Central Europe, Oceania, and even in Southern Europe and some parts of Scandinavia. This new "progressive structure" will be a major set back for all these countries.

While the World Cup circuit in Western Europe and the 5* CDIs are already more or less a closed shop with easy access for the big names and no access for the 'exotic' riders, this proposal will increase this tendency and will make CDI4* less accessible for riders in these parts of the world.  The World Cup Leagues in North America, in Central Europe and the Pacific League will struggle.

6-YO in Double Bridle in the Prix St Georges?

There was also a new Double bridle proposal, which makes me wonder if the FEI is making the same mistake again?

A few years ago the FEI decided to link the double bridle/snaffle bridle to the level of a CDI. This decision has led to, and still leads to, confusion at shows for the riders, trainers and judges. With the new proposal from the FEI, they are continuing to make the same mistake by adding more exceptions for the use of a double bridle. 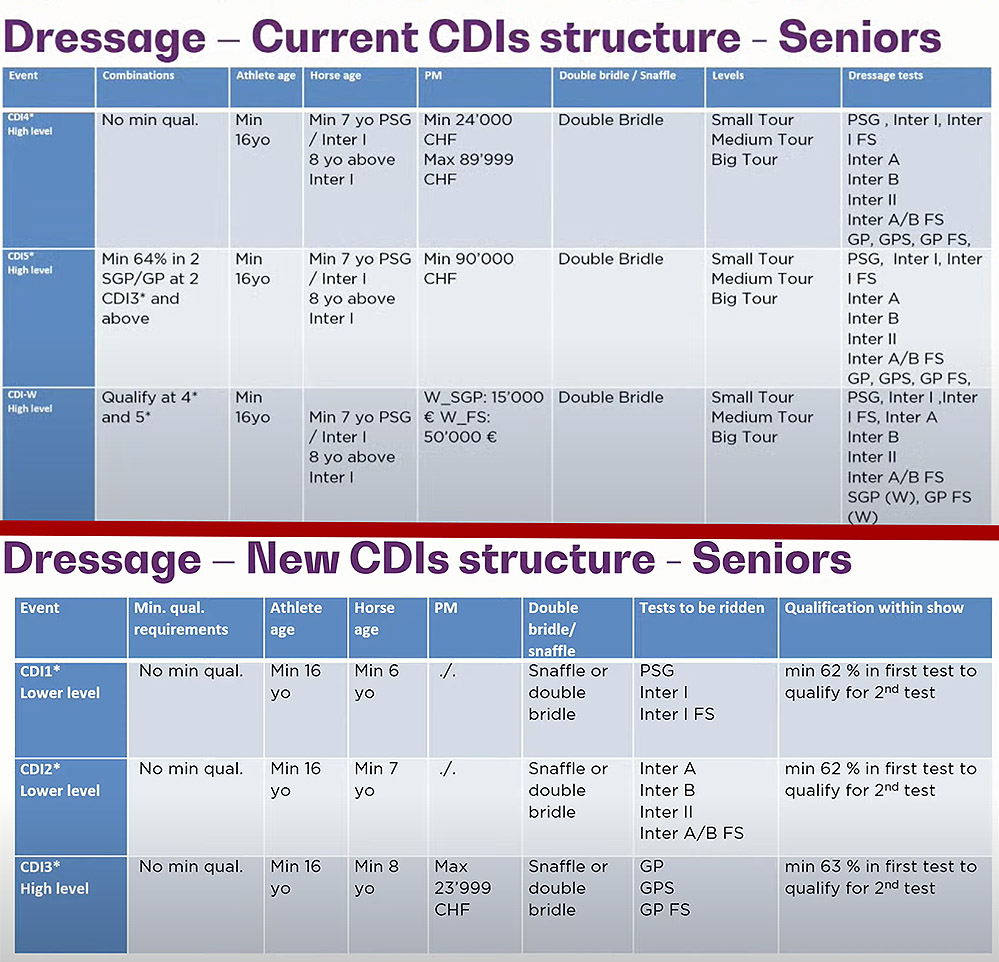 In my opinion this rule should be consistent with the level of the tests being ridden and not linked to the level of the show.  I have had many discussions with riders, trainers, judges and stewards on this topic and instead I would propose the following:

Furthermore I am rubbing my eyes when I see on the powerpoint presentation that there is a new proposal on the table which allows for a 6-year old to compete in Prix St Georges class in a double bridle!  The FEI proposes that in a CDI1* a 6-year old young horse is allowed to compete at Small Tour level (incl. Intermediaire I and Inter I Freestyle) in a double bridle. I truly hope this is a mistake and not done intentionally. Otherwise I can only refer to the FEI Code Conduct for the Welfare of the Horse.

These are just a few thoughts which make me very apprehensive of the future and sanity of international dressage competition sport.