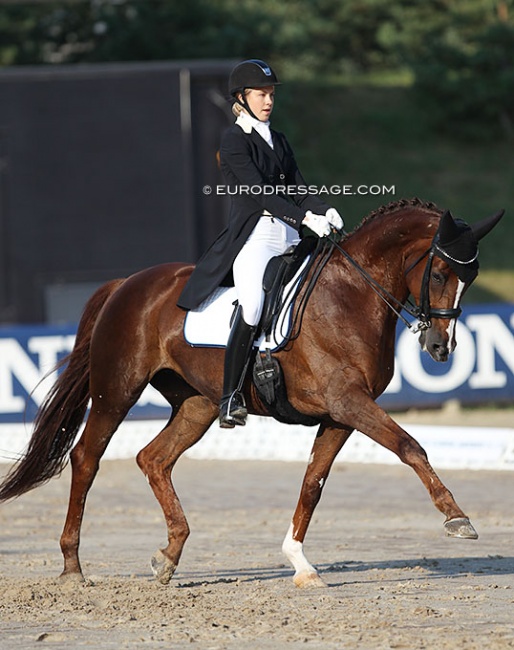 Princess Passion, Elina Vilen's 2018 European Junior Riders Championship ride, has been retired from sport and returned to Germany, where she will begin a career as broodmare.

Princess Passion is a 15-year old Oldenburg mare by Quaterback out of the late elite mare Royal Princess (by Rohdiamant x Donnerhall x Pik Bube). She is bred by Silke Gethmann in Germany

The chestnut filly sold as a foal to Mirja Aro fromin Helsinki, Finland, who named her Princess' Passion.

The mare initially stayed in Germany and did the mare performance test under Richard Jordan, granting her the title of state premium candidate.

She moved to Finland and was initially ridden by the 16-year old daughter of the owner, Linda Ikonen, who trained under the supervision of  Eevamaria Porthan Brodell.

When Ikonen went to college, the ride was passed on to junior Elina Vilen. The new pair was 12th at the 2017 Finnish Junior Riders Championships and in 2018 they had an experience building year, competing internationally in their first and only year in international sport.

They made their international debut at the CDI Ypaja in March 2018 and went on represented Finland at the 2018 Nordic Baltic Championships in Drammen (NOR), where they placed 8th in the team test and 16th in the individual test. At the 2018 European Junior Riders Championships in Fontainebleau, they posted 64.333% in the team test (50th) and 62.324% in the individual test (60th).

Owner Ikonen and breeder Gethmann have now agreed to bring Princess' Passion back to Germany for her retirement with a new career as broodmare planned.