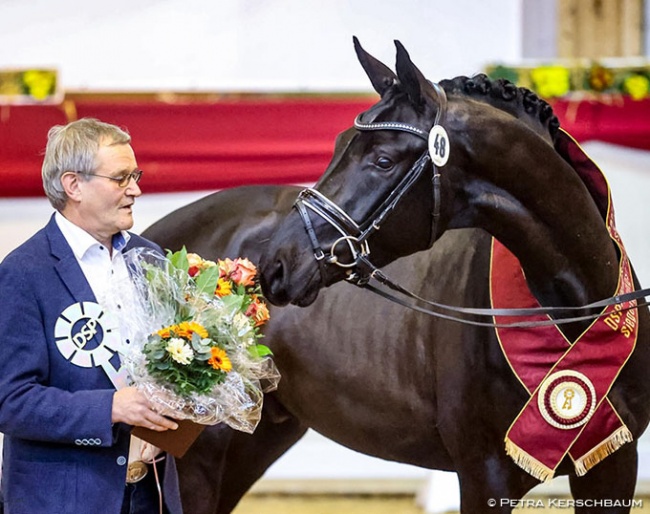 A black Don Royal x Quadroneur was named champion of the 2022 DSP Stallion Licensing which took place in Munich-Riem on 21 - 22 January 2022.

A collection of 47 colts was presented over two days, starting with the in-hand presentation on hard surface, followed by lunging, on Friday 21 January. On Saturday the phase in freedom and in-hand in walk followed after which the results were announced.  Twenty-three colts were licensed and eight named premium stallion.

The licensing took place with corona hygiene measures in place and there was no real audience although the entourage of each individual stallion made it appear as if there was plenty of people in the stands and at (VIP) tables.

The champion of the licensing was the DSP registered colt by Don Royal (by Don Juan de Hus x Rubin Royal) out of Queen Rubin II (by Quadroneur x Rubin Royal x Kolibri).

"This stallion is second to none. He presented himself with an outstanding temperament, always balanced, yet present to show what he had when it mattered," said Jörg Schrödter, the dressage sport committee member of the DSP. "His trot is dynamic with enormous ground cover, the canter very well balanced in which the hindleg jumps under really well. The walk is very good and relaxed. One can see a big career and a future in sport and breeding."

The black is bred and owned by Dr. Frank Klakow from Osterburg. The veterinarian runs an insemination center together with the Brandenburg state stud in Neustadt/Dusse. The colt was reared by Klakow himself and only sent into training with handler Jan Crome-Sperling mid December.

The dam, Queen Rubin II, already produced the licensed colt Big Bang (by Bon Coeur) who competed under Kristine Moller at the 2021 World Young Horse Championships in Verden for Luxembourg.

The Don Royal was one of eight premium stallions at this licensing.

And there were more double whammies: Antonius Schulze-Averdiek is listed as the owner of the premium Maracana x Biasini x Ehrentanz and he also presented the show jumping licensing champion in Munnich.

The online auction of the colts begins on 23 January and bidding concludes on 29 January.