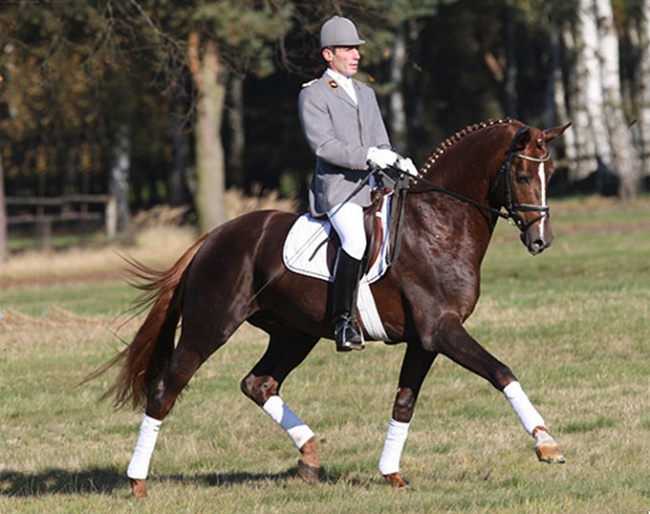 Fürst Nymphenburg is by Florencio out of Donner de Nero (by De Niro x Argentinus x Papi's Boy xx). He is bred at Zuchthof Fries.

He was first licensed at the 2007 Hanoverian Stallion Licensing, where owner Helmut von Fircks sold a minority share to the Celle State Stud.

Fürst Nymphenburg has stood in Celle the majority of the time, but returned to Gestut Nymphenburg for a period.

He was first trained and competed by Celle's Wolfhard Witte. The pair made its show debut in 2008. They were reserve champions at the 2008 Hanoverian Young Horse Championships in Verden and placed 9th at the 2008 Bundeschampionate.

Furst Nymphenburg then disappeared for almost four years from the show ring, making his return to the arena under Tessa Frank, Gestut Nymphenburg's head rider at the time. The new pair competed at M-level in 2012, moved up to S-level in 2013 and competed in the Nurnberger Burgpokal qualifiers in 2014, finishing 7th in the Finals. In 2015 the pair moved up to developing Grand Prix level but didn't make it to the Louisdor Finals. They did only one show in 2016 and returned in March 2017 for more Intermediaire II level competition.

In 2018 Fürst Nymphenburg became a schoolmaster for junior rider Sina Ellers and competed at several regional shows in north Germany. In 2019 he did two shows with new rider Vanessa-Sarah Hahnrath.

At the end of 2019 Von Fircks sold his ownership share to Celle and shortly afterwards in May 2020 Celle sold the stallion to Spain.

Jorge Elieser of Ganaderia Pueblo Nuevo near Madrid confirmed to Eurodressage that he had bought the stallion and announced its arrival in Spain a few days after the interview, but the entire deal fell through. Furst Nymphenburg was not bought and never went to Spain.

Jennifer Travis Arnoldt of Dreamscape Farm in Canada bought Furst Nymphenburg at the end of 2021 from Celle. The stallion will join Sagnol, Spörcken, Rubinio NRW, Finnigan, and Sir Gregory amongst others in Langley, BC, this January 2022.

As a breeding stallion Fürst Nymphenburg has produced seven licensed sons, including Fool's Paradise, Furst Highness, Furst Wallenstein, Furst Weedern, Furstenstern, First Row and a still nameless one. He sired 66 state premium daughters. In sport 562 offspring are registered with the German equestrian federation and 21 of them are already successful at S-level.

Arnoldt recently further expanded her stallion roster with Mo and Jim Swanson's Shavane, who is by the American bred sire Shakespeare RSF and out of the late elite mare Rheporter (by Royal Prince/Weltmeyer). Shavane was licensed with the German Oldenburg Verband in 2014 and won numerous breed show classes in the U.S.