The Essential Guide to the Canter Pirouette - Part V: Evaluation from the Judges' Viewpoint 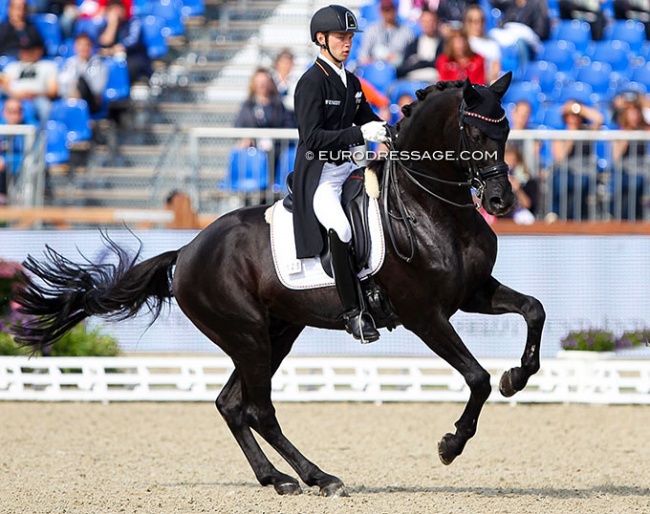 This article is a continuation of The Essential Guide to the Canter Pirouette
Part I: Origin Steeped in Military Training
Part II: Pirouettes in Cavalry Manuals 1826 - 1912
Part III: The "Cantering" Hind Legs Prevailed
Part IV: Three or Four-Beat Rhythm, an Academic Question?

As already mentioned, the "school canter" and the canter pirouette were allowed in dressage tests until the 1960s.

The then influential Swedish dressage judge Colonel Gustav Nyblaeus (1907-1988) insisted that before, during and after the canter pirouette the clear three-beat rhythm had to be maintained. In addition, there was the postulate of the late international German dressage judge General Horst Niemack (1909-1992) about the purity of the gait, which cannot be compensated for by any credit points.

As long as the canter pirouette in the dressage tests was still comparatively large and not too centered, there was hardly any criticism. In the following decades, the effort increased to ride the pirouette on an ever smaller circle. This led to the fact that the horses were collected more and more clearly before the start of the pirouette, so that there was a recognizable four-beat canter even before the actual pirouette took place. At times the canter was even delayed so much that the loss of the three-beat in the canter pirouette could not only be seen in slow motion.

The ideal of a canter pirouette has changed over time. The circle on which the horse was supposed to turn became increasingly smaller, the canter was more and more sitting and sometimes significantly delayed. The tendency towards clear centering and collection of the pirouette was only reflected in the regulations and the judges' seminars at the end of the 1990s.

At the international judges' seminars at the beginning of the 1990s, the purity of the gaits was not a fundamental issue, it was taken for granted. It was essentially about the number of canter strides and the pirouette’s size.

Unfortunately, in the 1990s in particular, this led to serious differences and disagreements when assessing canter pirouettes: Those who saw a four-beat and thought it was wrong, assessed the execution negatively and whoever was convinced that a four-beat was to be accepted in the canter pirouette awarded high marks.

In an article entitled “Correct riding and judging, Part IV” in Reiter Revue 11/95, Wilfried Gehrmann, a very experienced Grand Prix instructor and judge, described the dilemma in which riders and judges found themselves in the 1990s: “The evaluation of a pirouette can be rated quite differently. It is quite possible that a pirouette will be awarded an '8' by one judge and a '4' by the other. Both grades would have to be justified. With the `8´, for example, the high degree of collection would be rated positively, with the` 4´ the loss of the clear three-beat punished.“

At a dressage sport symposium in 1992 at the DOKR in Warendorf, when assessing the pirouette, it was recommended not only to concentrate on size and number of strides, although that not enough strides are generally worse than too many, because too few strides inevitably cause rush and possibly tension. The overall impression is crucial."

A well-done and well-balanced pirouette, in which the horse carries enough  weight on the hindquarters and remains in self-carriage, will always have the right size and the right number of strides."

At an FEI judges seminar in April 1994 in Weert, it was pointed out that the size of the pirouette is not decisive. The balanced collection is important at the beginning. If only 5 canter strides are shown in an entire pirouette, there is a risk that the horses are not completely balanced. At that time very small but flat pirouettes were often shown at the expense of the quality of the canter. The half pirouettes back then were wished to be a little bigger, but jumped well.

The "Modern" Trend in Pirouettes

In 1994 it became clear that a new, “more modern” trend in the execution of the canter pirouette was beginning to emerge.

At the 1996 international judges' seminar in Achleiten there was a rethinking: It was decided that a slight delay in the canter pirouette should be accepted. In 1996 the decision was made that the quality of the canter before, during and after the pirouette no longer has to be identical.

This concession also made it easier to ride smaller turns. And the higher the degree of collection, the closer the three-beat canter came to a four-bar canter in the turn, and the smaller the circle in the pirouette could be performed. So: small size over the purity of the gaits.

In the 12th edition (1997) of the Guidelines for Riding and Driving Volume II, Training for Advanced Riders of the German Equestrian Federation, there was the essential additional comment on the canter in the pirouette: “It must be taken into account here that the three-beat can dissolve in a well-collected canter pirouette due to the the inside-hind leg in the diagonal support touches down for a split second sooner than the outside front leg. However, this process can hardly be seen with the pure eye. It is crucial for the correct execution of the canter pirouette that the movement of the horse gives the impression of a canter with enough diligence.“

In the FEI Rules for Dressage Events, 20th Edition, 1999, the security of rhythm was still adhered to: "At whatever gait the pirouette (half-pirouette) is executed, the horse ... maintaining the exact cadence and sequence of footfalls of that gait. ”

The text in the Dressage Handbook (2006 edition) on the canter pirouette is almost identical to the current FEI regulations: “To demonstrate the willingness of the horse to turn around the inside leg on a small radius, slightly bent in the direction of the turn while maintaining the activity and the clarity of the canter, the straightness and the balance before and after the figure and clear canter strides during the turn. In the pirouette or half-pirouette, the judges should be able to recognize a real canter stride although the feet of the diagonal - inside hind leg, outside front leg - are not touching the ground simultaneously. "

In a FEI publication on the canter pirouette, the FEI Dressage Judge General Ghislain Fouarge wrote in July 2011: "The horse, slightly bent in the direction in which it is turning, remains` on the bit´ with light contact, turning smoothly around , and maintaining sequence and timing of the footfalls of that pace."

One of the positive features of performing a pirouette is under the term Rhythm: "Rhythm should be clear, steady and in a genuine three beat before, after and during the pirouette." With regard to the execution, Fouarge then explains: "The inside hind leg and the outside front leg are not touching the ground simultaneously."

In the chapter “Rhythm in the Pirouette”, the author clearly expresses the uncertainty at the time when it came to the question “Three beats in the pirouette yes or no”: “In the pirouette the rhythm appears to be a three beat although with small pirouettes this is almost impossible . There is much theoretical discussion based on slow motion recordings but this should not cloud the judges' assessment. There may be a slight hesitation but the canter gives the impression of a clear beat."

Fouarge clearly presented the problem: Either a clear three-beat with a slightly larger circular arc or as small a circular arc as possible in four-beat, with the inner hind leg resting in front of the outer front leg. At the moment, the second variant has triumphed at the expense of the pure gait.

History will show the further development.