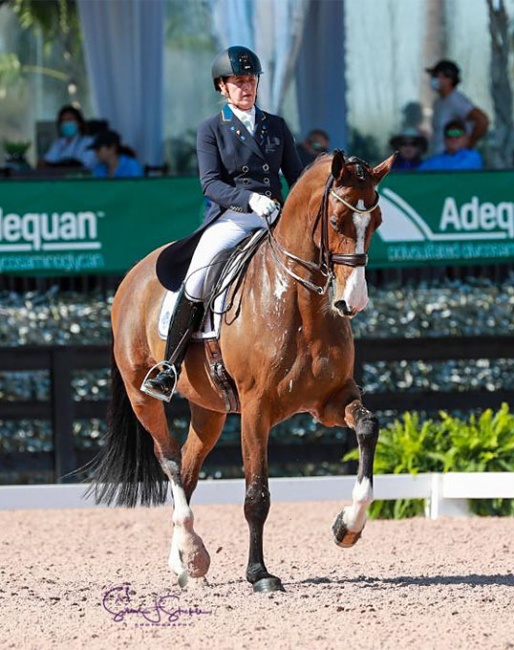 Riding Lövsta Stuteri’s 13-year-old Devanto in a class that only featured two combinations, Vilhelmson-Silfvén logged a new record score for the Holsteiner gelding at the level – 73.425% – despite a blip in the first set of one-time changes. Overall, they were rewarded with a smattering of eights in the test and a nine for extended canter. Runner-up spot went to Susan Dutta (USA) on her own and her husband Tim’s 13-year-old gelding Figeac DC with 68.596%.

Devanto was formerly campaigned at Grand Prix by Germany’s Juliane Brunkhorst. Vilhelmson-Silfvén did her first CDI on him at Global Dressage Festival exactly a year ago, and this was their eighth CDI test.

“It’s a gift to get a ready-made horse,” said the 54-year-old Vilhelmson-Silfvén. “But that’s not to say it’s easier, because you really have to make them your own. You have to learn how they work, and they have to learn how you work. You have to give them time to understand you. I get to understand how a horse like Devanto – with all this power – how he reacts, if he reacts, if he’s too tense, or if he’s over ambitious. He’s very sensitive, and I like that.”

Vilhelmson-Silfvén is a regular on the Wellington circuit and values everything that GDF offers.

“In Sweden, we travel three days to every show, so you can’t go to too many one after the other,” she added. “Here you can go again and again and try to figure out and adjust your own way of competing. It gives you so many possibilities. Getting to know a horse, or having young ones, it’s super.

“You can also have your whole string here and ride them all at once, and still go home every day and ride the ones there. In Europe, you’re away for a week at a show and you leave the whole stable. Here I can choose to ride as much as I want,” concluded Vilhelmson-Silfvén.

It was the final competitor in the Intermediate I CDI1*, Susan Pape, who swept the class with a unanimous first place from the five judges. The British rider, 58, rode Harmony Sporthorses’s 11-year-old Jazz x Flemmingh mare Giulilanta to 72.265% at only the pair’s second international show together. They had more than 2.6 percentage points in hand over second-placed Shannon Dueck (CAN) on As You Wish.