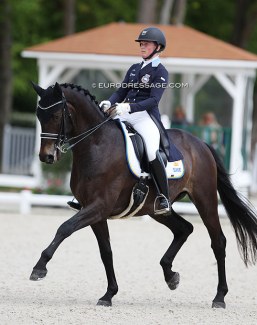 Malin Rinné and Carl Hedin have been invited as the test riders for the 2022 Swedish Warmblood Stallion Performance Testing in Stromsholm.

The test riders assess the rideability and potential of the stallion on the final, exam day of the testing on 5 March.

The 40-year old Malin Rinné returns as test rider. She is a professional rider in Sweden. Her international career took place between 2008 and 2018 aboard Scharmeur (by Schwadroneur x Napoleon) which she presented at the 2008 World Young Horse Championships and then returned to the CDI ring in 2015 in the medium tour followed by some Grand Prix level showing. Her last international was in May 2018. Rinné is a regular face in Swedish Young horse Championships.

The 30-year old Carl Hedin is the benjamin amongst the test riders. He is a very popular face in Sweden and world wide as an "influencer," fearless and playful in the saddle. His international dressage career began in 2015 at Under 25 Grand Prix level on Kataleis Vilja. In 2020 and 2021 he focused on international show jumping with horses Play-Off St. Ghyvan and Custom Made, while at the same time he rode dressage at national level in Sweden.