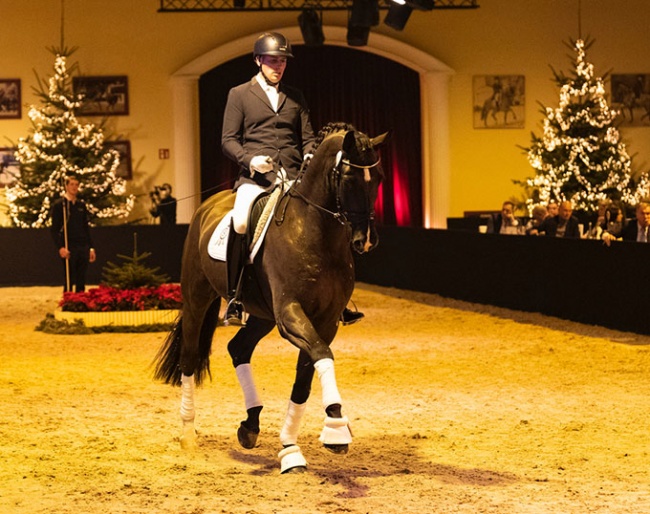 Performance Sales International, founded by Ullrich Kasselmann and Paul Schockemöhle, is a world renowned auction of exclusive young sport horses and it celebrated its 42nd year of hosting this original concept in which gala and lifestyle are combined to exclusive horse shopping.

This year the most expensive horse was a show jumper.

The Oldenburg mare Londina PS (by Carembar de Muze (London) x Chacco-Blue) has already been successful in international youngster tours at 1.45 m level and is directly related to the international crack Toulago.

The buyers from Switzerland jubilated when the 7-year-old mare was knocked down to 1,950,000 euro.

Fürst Bayram (by Fürstenball x Sir Donnerhall I) was the  most sought-after dressage horse. Equipped with impressive gaits, the imposing 5-year-old Oldenburg State Champion marched out of the auction ring towards Bavaria for 1,700,000 euro.

Reichert (née Wortmann) is CEO of Wett Star, a horse race betting agency, and is listed as founder of WINunited, a Malta based marketing company for e-commerce (betting) operations. Her husband Oliver Reichert is CEO of Birkenstock, who in the spring of this year sold up to 70% of the business in a $4.7 Billion deal to L Catterton, a firm backed by the billionaire chief executive of LVMH, Bernard Arnault, according to Forbes.com.

Fashion Prinz, a 4-year old Oldenburg stallion by Furst Romancier x Sarkozy, became the second most expensive horse. He sold for 750,000 euro to the Houston family, regular clients of PSI

Korean Olympian Dong Seon King invested heavily in new horse stock at the PSI auction. The Korean based rider has been a known investor in young horses which are then produced to FEI level.

Kim celebrated his purchase by climbing on Forro and doing his own lap of honour.

After already acquiring six (!) stallions at the licensing in Hanover, Oldenburg, and Westfalia, they now added another spectacular buy to their list: Frescobaldi.

The 3-year old Oldenburg stallion is by Foundation and out of Save Secret (by Sezuan x Furst Romancier). He is bred by Paul Schockemöhle and born at Gestut Lewitz. He was reared and started at the Kasselmann's Osthoff Stud.

Another horse sold to France, Furstin Zonia (by Furstenball x Zonik). A show jumping stable from the North of France, now branching out to dressage, bought the mare for 175,000 euro.

The interesting cross bred Heineken (by Guelderlander Henkie out of a Sir Donnerhall I dam) sold for 106,000 euro.

The total proceeds reached 19,538,000 euro. A dressage horse cost on average 369,625 euro while a jumper was 426,680 euro. Bids were placed in the auction hall in person or by phone; the international clientele came from Germany, Italy, Sweden, France, Spain, Korea, Morocco, Mexico or the USA, among others. Around 1,000 spectators followed the action via livestream.

Paul Schockemöhle spoke with breeder pride: "This was the most successful auction so far, also a result of the great breeding I have devoted myself to over the past 20 years. For me especially as a breeder this is a huge success because of the quality of the horses. Of the dressage horses, 18 also came from Lewitz."

"We have developed a completely new format this year, the clientele was very happy, the atmosphere very personal and familiar. I am delighted about this successful end of the year, the P.S.I. Auction has once again proven its reputation beyond national borders," Ulli Kasselmann concluded after the 42nd Auction.