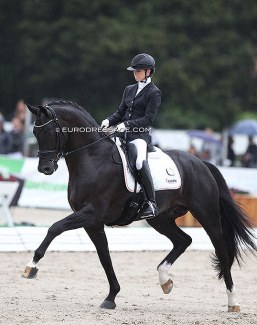 Young stallion Kjento and Grand Prix horses Gio and Hermes have been nominated for the "KWPN Horse of the Year 2021' title, which will be announced at the 2022 KWPN Stallion Show in 's Hertogenbosch in February.

Six horses in total - three show jumpers and three dressage horses - have been nominated for the title.

Hermes (by Easy Game x Flemmingh) became the shooting star of Dutch dressage on the international scene in 2021. Due to an administrative error in the ownership registration, he was not allowed to participate in Tokyo. Under Dinja van Liere win the Nations Cup in Rotterdam and went to Aachen, where they won the 5* Grand Prix and placed second in the freestyle.