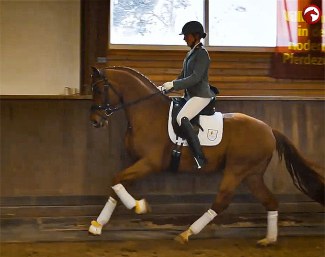 The Hanoverian stallion Von Und Zu became the high scorer of the 50-Day Stallion Performance Test which concluded in Schlieckau on 30 November 2021.

The 4-year old led a field of 36 participating dressage stallions, the majority aged 3 and 4, and scored a total of 9.17 points.

Von Und Zu (by Vitalis x Floriscount) is owned by the Celle state stud. He got 9.25 for character, 8.5 for walk, 9.5 for trot, 9 for canter, 9.5 for willingness to work, 8 for jumping, 9.5 for general impression and 10 for rideability under the test rider.  In the spring of 2021 Von Und Zu was unable to complete the sport test because he had become unlevel.

The second highest score was achieved by Santos (by Secret x Don Schufro), who got a total of 8.77 points. He got 8.5 for walk and trot, 9 for canter, 9.25 for rideability under the test rider, 9 for general impression and 8 for jumping.

The third highest score was achieved by  Gestut Scönweide's Sky (by Sezuan x Sir Donnerhall) who got 8.68 points in total. The colt earned 7.5 for walk, 8.5 for trot, 9 for canter, 9 for rideability, 9.75 under the test rider, 9 for jumping and 8.5 for general impression. The liver chestnut is owned by Swiss Adrian Gasser, who purchased the horse for 490,000 euro at auction.

The fourth highest scoring stallion was Paul Schockemohle's Debutant PS (by Deparon) with 8.53 points. He received 7.5 for walk, 9 for trot and 8.5 for canter. He got 9.5 for rideability from the test rider, 7.5 for jumping and 8.5 for general impression.

The 7-year old Trakehner licensing champion His Moment finally fulfilled the requirements to stay licensed. He finished the performance test with 7.84 points.