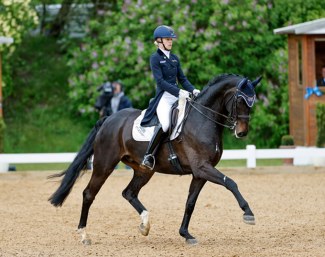 Further changes have taken place to the line-up of horses that will compete at the 2021 Louisdor Cup Finals, the German Developing Grand Prix Horse championship, to be held at the 2021 CDI Franfurt on 16 - 19 December 2021.

Yesterday, Eurodressage reported that Isabell Werth has withdrawn Superb from the Finals and that they are replaced by Lena Waldmann on Morricone.

Today a further two drop-outs have been substituted.

Swedish Malin Wahlkamp-Nilsson will not be riding Masahiro Kosaka's Dedale de Hus (by Don Juan de Hus x Furst Heinrich) in the Finals. The Japanese owner has made some changes in his horse management and pulled his horses away from Nilsson/Kittel and relocated them at Christoph Koschel's yard in Hagen in preparation of Kosaka riding them in Wellington this winter.  Dedale de Hus was the winner of the first qualifier in Hagen with 74.674%.

Leonie Richter will not be riding the 9-year old Bavarian bred Quitschbunt (by Quaterback x Lord Loxley). Originally competed by Ralf Kornprobst before moving to Richter to be sold, the chestnut gelding has found a new owner in Australia. He was owned by Falk Pewerstorf. Richter rode him to a second place with 74.419% at the qualifier at  Gut Ising.

Bianca Nowag and the 9-year old Oldenburg mare Florine (by Foundation) were third at the last qualifier in Oldenburg with a score of 72.605%. The mare is owned by the Von Wulffen family.

Annabel Frenzen and the home bred 9-year old Rhinelander Silberstern (by Silbermond x Raphael) were third at the qualifier in Munich with 73.046%. The horse is owned by Annabel's father Achim.