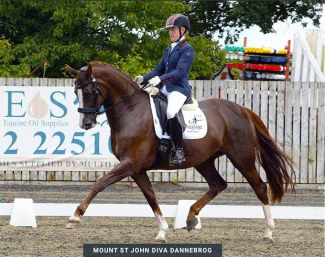 The bidding on the 13 lots in the online auction closed on 28 November 2021. The majority of the lots were bought by British buyers, a few didn't embryos did not meet the reserve price, and four lots sold abroad.

Germans Stephanie and Jörg Hüffer paid 32,500 euro for the unborn foal in a recipient mare by the combination Jameson out of Diva Dannebrog (by Don Schufro). The dam was a top scorer in her Mare Performance Test in Germany, she is dam to the licensed stallion Zoom and represented Great Britain at the 2018 World Equestrian Games in para dressage under Natasha Baker.

The second most expensive lot was the 8-year old broodmare MSJ Fame (by Furst Heinrich out of FBW Dejavu (by Dacaprio). She sold to a British client for 21,500 euro.

An implanted embryo by So Perfect out of Mount St. John VIP (by Vivaldi), which Charlotte Dujardin piloted to the British Small Tour champion's title in 2019, sold for 20,000 euro to a Brit.

An embryo by Iron out of Atterupgaards O2 (by Belissimo M) sold to a Brit for 16,500 euro, while an embryo by Vitalis out of Traumtänzerin (by Totilas) sold to German Henrik Wassmann for 16,000 euro.

An embryo by Danone out of Diva Utopia (by Krack C) will go to a British buyer for 15,500 euro, broodmare MSJ Sensation (by San Amour x Dimaggio) stays in the U.K. for 15,000 euro.

Finnish Sointu Siven bought the broodmare Viva Dublet (by Vitalis x Don Schufro) for 14,500 euro She is related to U.S. Olympic teal horse Gorklintgaards Dublet. A Dutch buyer secured an embryo by Be Sure x Secret for 12,000 euro.