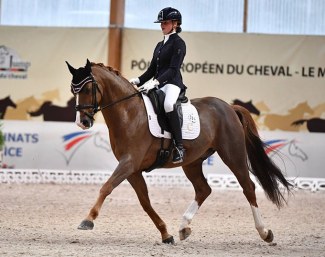 Don Amour de Hus is a 15-year old Oldenburg gelding by Don Primero out of Rumira (by Rohdiamant). He is bred by Harli Seifert.

Under owner Alizee Roussel, Don Amour made his internetional show debut at the 2021 CDI Vierzon. A month later he competed at the 2012 World Championships for young dressage horses in Verden, where he placed 17th in the consolation finals. They were also fourth at the 2012 French Young Horse Championships.

Roussel and Don Amour made their international show debut two years later in 2014 in Biarritz and moved up to medium tour level in 2015. Nationally he was shown at Grand Prix level, but internationally he did not move above medium tour. Their last CDI was in Le Mans in 2017.

After a break of four years from the CDI ring, Don Amour de Hus returned to the big arena in 2021 in Le Mans and went on to represent France at the 2021 European Children Championships in Oliva Nova, Spain, where they were 26th in the team test.