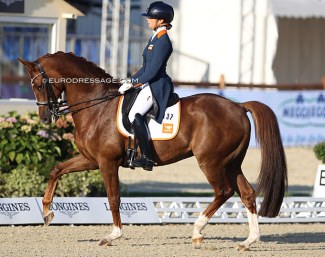 Edson and Fyeo, the two Grand Prix horses which Febe van Zwambagt competed in the international Under 25 division, have been sold abroad.

In October 2021 Van Zwambagt left her employers of four years, Alex and Diederik van Silfhout, to go independent. Her two rides have been sold.

With the liver chestnut Febe competed on the Dutch team at the 2020 and 2021 European Under 25 Championships.  They won double team silver and  were twice seventh in the Kur to Music finals.

He has been sold to Korean Soo-Jin Lee, who is aiming for the Asian Games. In 2011 the now 34-year old used to be based in Belgium with Wim Verwimp. She competed internationally that year aboard  the Rhinelander gelding Ravel (by Ragazzo x Romadour) at CDI's in Zwolle, Saumur, Compiegne, Pompadour, Mechelen, and Drachten. The latter show in January 2012 was her last international.

Soo-Jin and Edson are currently based at Joyce Lenaerts in preparation of the 2022 Asian Games in Hangzhou, China.

Febe's second Under 25 ride was 11-year old KWPN bred Fyeo (by United x Jazz), who was co-owned by Siem Kat and P. Both.

Van Zwambagt first rode him at Young riders level in 2018 and 2019 at CDI's in Exloo, Le Mans and Lier, and once showed him internationally at Under 25 level at the CDI Exloo in May 2021.  They also won bronze at the 2019 Dutch Young Riders Championship and bronze at the 2020 Dutch Under 25 Championships.

He has been sold to a Russian rider as a schoolmaster.

Diederik van Silfhout was last member of the Dutch senior team at the 2017 European Championships in Gothenburg aboard Four Seasons.

In 2019 he made an effort to get selected on the Dutch team for the 2019 Europeans in Rotterdam aboard the licensed stallion Expression, but was not picked. Expression did his last CDI in March 2020 in Herning and has not been out to compete since.

In an interview with De Hoefslag, Diederik explained that, "the past year we have been focusing more on dealing. (...) There needs to be bread on the table, it's that simple. We don't have a money tree in the garden and sometimes it's hard. You can have a great horse and a lot of money is offered for it. What do you choose? Do you go for the bread or the higher purpose (competition). These choices are not always easy."

Van Silfhout declined to comment to Eurodressage on Expression's status, but he told De Hoefslag that he currently focuses on producing the 8-year old Impression (by Don Schufro x Ferro) and Joop van Uytert's Dante US (by Dante Weltino x Sir Donnerhall).