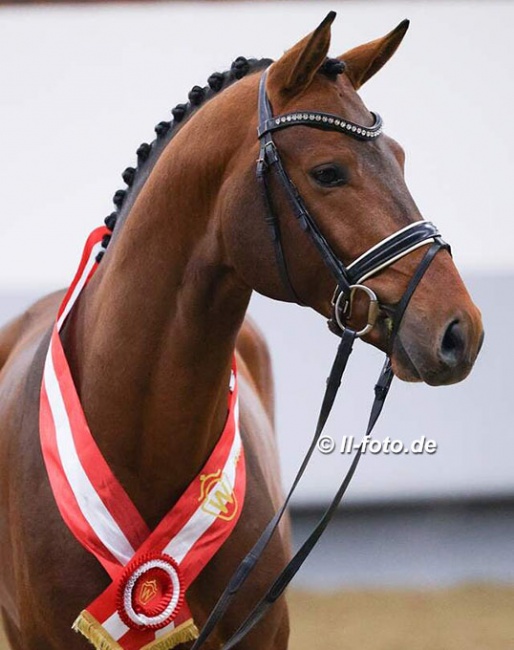 Extra Gold (by Escolar x Apache x Don Schufro) has been named the champion of the 2021 Westfalian Stallion Licensing in Munster-Handorf on 22 November 2022.

The 2021 Westfalian main licensing featured a collection of 58 dressage bred stallions of which 53 were presented.

The commercial background and approach of the Westfalian breeding director and sales manager Thomas Münch left nothing to the imagination. No less than 35 colts were approved (approx. 75%) and the licensing committee made the farcical decision to name no less than six (!!) stallions reserve champion.

"There hasn't been a vintage with a quality density at the top like this one for a long time," said Münch.

The inability or unwillingsnesss to properly rank the premium stallions according to quality discloses the commercial approach of the breeding society, completing eroding the "value" of a premium title to the point of the non-sensical. Either you don't rank the stallions at all and just name them premium (like in Hanover), or you provide a proper ranking (like in Oldenburg) and send a clear message to the breeders, stallion keepers, and owners.

Then again, who can blame Munch as his premium title festival is bringing more money in the Westfalian pocket than ever before, and he literally can be quoted that the "breeders will do the selection for themselves" and decide which breeding stallion survives on the market. So his approach with an open studbook where Hanoverians, KWPNs, Rhinelanders, have equal chances for a premium title, turns this licensing into a magnet and colts are selling like hot cakes in this (post) corona spendthrift. To what extent are quality, standard, and tradition sacrificed for the big bucks.. time will tell.

There were 14 premium stallions in total, so almost half of the licensed colts were named premium. Insert emoji here of female raising her arms in wonder.

Extra Gold, a Story of Strife and Success

A champion was named and that was Extra Gold. The Escolar colt out of Aweih (by Apache x Don Schufro x Sandro Hit) has Isabell Werth's Weihegold as grand dam and it gives a touch of Hollywood glam to Extra Gold's pedigree.

Bred and owned by Bettina Hinnemann, this bay colt is the product of a battle fought in court. Dam Aweih is an embryotransfer by Apache out of Weihegold and the embryo was payment. Weihegold's owner Christine Arns-Krogman brought Weihegold to Johann Hinnemann to be trained in 2011 and instead of paying board and training fees, it was agreed that Hinnemann could flush an embryo out of the mare.  Hinnemann chose Apache as a sire and in 2013 the foal Aweih was born out of a recipient dam under the care of Hinnemann. Arns-Krogman contested that she was the breeder of Aweih and the case went to court. After a trial and a subsequent appeal, Hinnemann took the matter to the supreme court, which ruled in favour of (Johann and) Bettina Hinnemann.

At the licensing in Munster Extra Gold convinced the licensing committee of his star quality. The 1,64m standing colt was not for sale and will stand at stud at Hinnemann's Krusterhof in Voerde, Germany.

"Impression, freedom of shoulder and type of the stallion leave nothing to be desired," Münch raved.

The licensing committee invited no less than 14 colts into the premium ring and six of them were named reserve champion. Everyone's a winner!

The reserve champion that had the most commercial value for buyers was the Hanoverian bred colt Vogue (by Vitalis out of state premium mare Fräulein W (by Fidertanz x Sandro Hit x Monte Carlo)). The dam was the Rhinelander Mare Champion of 2013. The bay stallion, bred by Herbert Werth, sold at auction for 940,000 euro.

It was a tough bidding duel between an unidentifiable online bidder and Andreas Helgstrand/Paul Schockemöhle. Earlier reports that the bidding was against Gestut Bonhomme were confirmed untrue. “Schockstrand" won the money duel for the Vitalis and got him for 940,000 euro.

Schockstrand also purchased another reserve champion, the colt by Franklin x Rock Forever I x Florestan, bred by Hendrik Schulte-Märter, for 410,000 euro. The owner of the horse was listed as "Blue Moon Sporthorses," an unknown company based in Kissenbrück, the town where Helgstrand's German agent Udo Wagner lives. According to Horses.nl he also represented the stallion in Munster so it raises questions if this was a full buy of Helgstrand.

The Four Other Runners-Up

The colt by Benicio x Vivaldi x Ferragamo, bred by Georg & Leonie Kellerwessel and owned by Friederike Kampmeyer, as well as Escaneno (by Escamillo x Veneno x Ravallo), bred and owned by Tobias Schult, were also reserve champions but not for sale.

Thirty of the 32 colts offered for sale at auction found a new owner under the hammer of Thomas Münch. A turnover of 3.6 million euro was made.

The most expensive premium stallion that wasn't a reserve champion or "Endring" stallion as Westfalia calls it, was the Secret x Dresemann x Florestan, which sold for 151,000 euro to the state stud Celle.

The most expensive non-premium stallion was the buckskin coloured Quaside MD x Captain Fire, bred by Sascha Hahn and presented by Ib Berger. He sold for 150,000 euro to...... Helgstrand.

Our colleagues of St. Georg published an article with a clear overview and discussion of each of the premium stallions. Read it here.