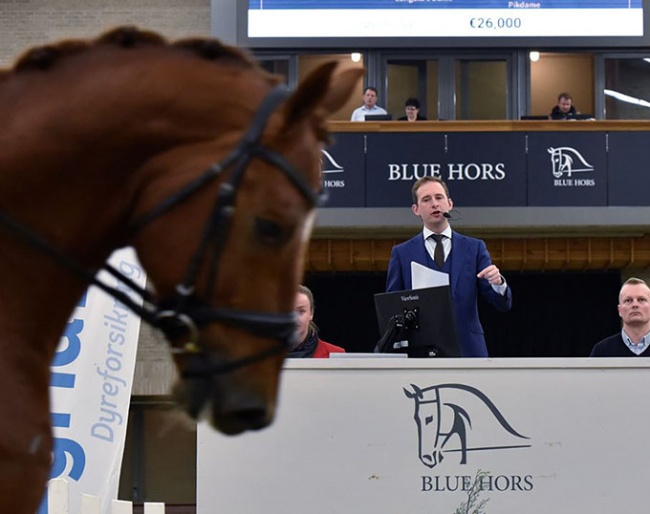 The former licensed stallion Emilio became the best selling horse in the first auction Blue Hors has hosted with a collection of young horses exclusively owned by the Danish stud farm.

The 2021 Blue Horse Autumn Auction was held on Saturday 13 November during the CDI Ranbøl and bidding took place live at the event as well as online.

Guest were also treated to some fun entertainment with a short music show by X-factor duo Simon & Marcus.

The 7-year old Blue Hors Emilio (by Escolar x Lauries Crusador xx) was a former licensed stallion and now a gelding, ready for the small tour. He sold to Belgium as price highlight for 104,000 euro.

The second most expensive horse was Sir Helmut (by Sir Donnerhall x Benetton Dream) which was bought by a bidder at the venue for 74,000 euro. He sold to Danish junior rider Kristian Wurtz Green, who rides for Stutteri Schuberts.

The 5-year old gelding Zatisfaction (by Zalabaster x Bretton Woods) and the 4-year old stallion Fabion (by Farrell x Fidertanz) both sold for 40,000 euro to bidders in the arena. Zatisfaction was bought by Mette Holmgaard, Fabion was secured by Alice Oppelstrup.