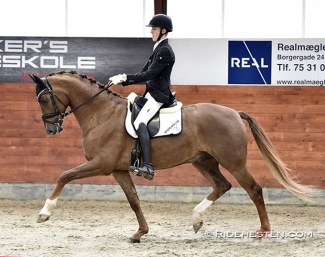 Vividus QRE is a 6-year old Swedish warmblood gelding by Zaladin MI out of Dittrich (by Don Charly x Martini x Ceylon). He is bred by Christian Påhlsson in Sweden.

The liver chestnut immediately caught the attention of the big league when he was a foal. He sold for 11,250 euro to Blue Hors stud at the 2015 Swedish Warmblood Elite Foal Auction.

Vividus QRE came back into the spotlight in 2020 under Blue Hors Team rider Anders Sjøbeck Hoeck. The ownership of the horse had changed though. Blue Hors no longer owned him by Tina Merrild Vind Storm.

The talented and tall liver chestnut has been purchased by the Zinglersen family and joined Cathrine Dufour's barn this week.

Lookswise Vividus QRE strongly resembles the Zinglersen's top horse, Bohemian, who scored double silver at the 2021 European Dressage Championships in September.  Dufour will be developing the horse in the future and can relax that this one will stay in the family.

"I’ll educate him, but maybe Louise Zinglersen will take over one day," she told Eurodressage. "he reminds me so much of Bohemian. when he was young."

Dufour's coach Kyra Kyrklund is proud that her pupil now has a Swedish warmblood to ride. "He is fourth generation by stallions I have been training at Tullstorp (Jan Brink's farm)," said Kyra. "A bit scary how time flies when you have fun."