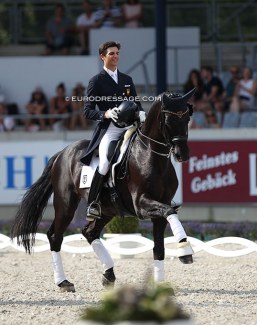 At the 2021 CDI Madrid on 22 - 24 October 2021, Spanish Grand Prix rider Juan Matute Guimon rode his career starting horse Don Diego for the last time down the centerline. After a ten-year career as an internationally competed dressage horse, the 18-year old Hanoverian has been retired from sport.

Don Diego is by Don Frederico out of Wie Platine (by Wolkenstein II x Matcho AA). He is bred by Claus Schütt in Hemmoor, Germany.

Don Diego was discovered by Juan Matute Azpitarte at the 2007 Hanoverian Spring Elite auction in Verden. The Matute family was based in Wellington, Florida, at the time, but Juan kept the 4-year old Don Diego in training in Spain.

In 2008 the tall black gelding made his debut on the national circuit ridden by Enrique Brewah Granados. He competed him through 2009 in the five and six-year old young horse tests

In 2011 José Antonio García Mena took over the reins and showed Don Diego in the international small tour classes at the Sunshine tour in Vejer de la Frontera. They finished their one-year partnership with a season highlight: the silver medal at the 2011 Spanish Small Tour Championships held at Club SEK.

From Juniors to Grand Prix

In the winter of 2011-2012 Don Diego joined the Matutes in Wellington, Florida, where he became Juan Matute junior's career starting horse, taking him from junior level to Grand Prix.  They became key players in the growth of the U25 category in Spain.

The pair made its international show debut at junior level at the 2012 CDI West Palm Beach, where they won the team and individual test. They competed extensively in Florida that winter with twelve competition starts of which eleven were winning ones. The gelding took Juan to his first European Championships, the Junior Euros in Berne, Switzerland, where they were 25th in the individual test.

In 2013 the pair became sponsored by Yeguada de Ymas and once more competed in West Palm Beach and Wellington with another twelve junior starts, before heading to Europe in spring for the CDI Compiegne and Hagen, before attending the 2013 European Junior Riders Championships, where they finished just off the podium - fourth - in the Kur to Music.

In 2014 the pair competed in the senior small tour at the Global Dressage Festival and finished the season there with their first Under 25 CDI start, winning both rounds. They were invited to ride in the CDIO-U25 tour in Aachen in the summer of 2014.

In 2015 the duo rode in its first World Cup qualifiers in Wellington and in Europe did the U25 tour in Compiegne and Hagen. In 2016 they achieved the apex in their career together, representing Spain at the inaugural European under 25 championships in Hagen, where they won short Grand Prix test bronze.

As of 2017 Matute's younger horse Quantico took over the number one spot in the barn and became his 2018 WEG team ride, while Don Diego continued to compete non stop in the Under 25 as well as the senior Grand Prix divisions. In 2017 they became Spanish Under 25 Champions in Segovia and won the U25 Kur to Music at the CDIO Rotterdam.

In 2018 Don Diego was still going full throttle with a full Wellington season, winning the Under 25 Nations Cup CDIO, followed by CDI Segovia and CDIO-U25 Aachen, where he was second in the freestyle He then got a long break and returned to the arena at the 2019 CDI Doha. Four months later he did Leudelange and Aachen back to back. They finished the year in Madrid.

In the 2020-2021 corona years the aging Don Diego was able to shift down a gear and only did two shows in Wellington 2020 and then was off from CDI competition for fifteen months as Juan suffered a life-threatening brain bleed in May 2020 from which he has fully recovered. This year Don Diego returned to the CDI stage at Camarma de Esteruela.

On Sunday 24 October 2021 Matute closed a beautiful chapter in his career with Don Diego. This combination said goodbye to the competition ring. Performing to the melodies of the Phantom of the Opera, Don Diego made his last strides in the competition ring at the CDI4* Madrid, hosted at Club de Campo Villa de Madrid. He placed fourth in the Kur with 71.710%.

"It was a very special and emotional weekend. I have been riding this horse for so long. I had tears in my eyes for the gratitude I feel towards Don Diego. He has given me so many emotions, titles, awards that we celebrated together," Matute told Eurodressage. "He has been a really difficult horse, because he is the greatest of movers with the biggest gaits, but he had such a huge heart. He gave 1000% each and every day. He taught me everything that I know. I am the rider I am today because of him."

The FEI recorded 136 international competition starts for Don Diego in his 10-year career with Matute.

In the spring of 2022, Don Diego will be retired to the field.

"He'll stay at home for the next months in the fall and winter," said Juan. " In the spring we will take him to a pasture, where he will live the rest of his life, two hours away from Madrid, so I can keep on visiting him. It's time for him to be left in peace and enjoy being a horse, out in the field. That's what we can give back to them, the feeling of them being a horse."