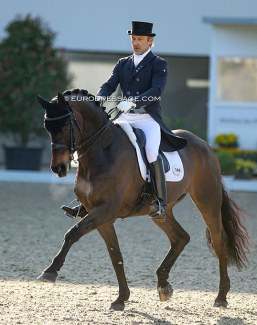 Royal Rubinstein is a 16-year old Hanoverian stallion by Rubin Royal out of Sunny Girl (by Sao Paulo x Weltmeyer). He is bred by Daniel Sabel in Germany.

Belgian Belgian David Engelen trained the horse from novice to Grand Prix level. He has been coached by Wolfram Wittig.

They placed sixth at the 2011 Belgian Young Horse Championships in the 6-year old division and made their international show debut at small tour level at the 2013 CDI Compiegne in France. He also competed at Deauville that year before moving up to Grand Prix level at the 2014 CDI Compiegne.

The pair consistently competed at international GP level through 2019 with their most active period being in 2014 - 2015. They campaigned at CDI's across Europe including Fritzens, Zandhoven, Joosland, Roosendaal, Nice, Mechelen, Maastricht, Aachen, Crozet, Rotterdam, Waregem, Exloo, London, and Sint-Truiden.

"Not a Competition Rider"

In July 2019 they did their last CDI in Deauville, France, after which Engelen decided to sell his horse and put his tails into storage.

"I finally made the decision to quit competition sport," Engelen told Eurodressage. "I consider myself a bad competition rider as I can't help myself but continue to train in the test. Whenever I feel something I want to fix it in the test and start training my horse, forgetting that there are judges," he joked. "I don't think I'm diplomatic enough to play the game, all things a good competition rider needs to do."

He continued, "I have a lot of fun at home training horses on a daily basis and am going to focus on finding and training young horses."

"She will compete him in para dressage and maybe even in the Grand Prix," said Engelen, whose first Grand Prix horse was the well known Belgian warmblood mare Rosantica (by Camus). She produced three foals: Weltica (by Welt Hit II), Benfica (by De Niro), and Belissima (by De Niro). The latter mare produced Lisa Wilcox' internationally competed and recently retired Grand Prix horse Galant (by Escuro).

The Landgraaf based Janssen made her international show debut in the para classes at the CPEDI Waregem in April 2021 aboard the 15-year old Westfalian Dream-Boy (by Dream On x Donnerhall) and has been long-listed for the Dutch Para Olympic team. They also competed at the CPEDI's in Kronenberg and Grote-Brogel this summer and now aims for the 2022 World Championships for Para Dressage in Herning (DEN).

"To me it's important to have another horse alongside Dream-Boy to achieve my goals on the road to the World Championships, European Champions and Paralympics in Paris," Janssen told Eurodressage. "Because my second horse Bailando (by Don Schufro) is too young and Royal Rubinstein crossed my path, he was the perfect horse for me. I couldn't believe it. He's super sweet and calm, has a lot of talent and experience. He accepted me  and my limitations. It's difficult to find a fitting para horse, so I praise myself lucky to already have two super sweet horses. With Royal the picture is complete. We will be competing in the Intermediaire tour and hopefully also a Grand prix test, but the main goal is para dressage and my big dreams."

In 2017 Janssen was diagnosed with the neurological disorder CIAP (Chronic Idiopathic Axonal Polyneuropathy) which affects especially the left side of her body, making it difficult to hold the reins and she struggles with her left foot. In 2020 she was para categorized, initially as Grade III but then moved to Grade IV.